Collecting Roger Maris baseball cards can be one of the most competitive endeavors in the hobby.

Even though he's not a Hall of Famer, Maris remains extremely popular for two big reasons:

1. He played for the Yankees.

2. He broke Babe Ruth's single season home run record in 1961 when he hit 61 round trippers.

That combination allowed him to win the hearts of many fans. And that puts his baseball cards in very high demand.

In this guide we'll take a crack at breaking down everything you need to know about Roger Maris cards.

How Much Are Roger Maris Cards Worth?

The answer to that question can depend on so many factors. His rookie card is certainly his most valuable but after that, the value of a particular Maris card is largely due to the scarcity and condition of that issue. Some cards suffer more print and condition issues than others and that can make a huge difference in price. Here's a quick look at our top five recommended Maris cards with links to eBay so you can check up-to-date pricing:

Let's take a look at some of Maris's key mainstream cards first before we talk about some of his oddball cards. There are only 11 mainstream Maris cards in total so putting together his base set is relatively easy. But, that doesn't mean it will be cheap.

This card is a must have for any collector or Roger Maris fan! 1958 marked Maris’ second season in the major leagues. He began the season with the Cleveland Indians, but was traded to the Kansas City Athletics mid way through the season, after only 51 games. He finished the season with 28 home runs and 80 RBIs.

Being his only recognized rookie card, this is one of the most popular Roger Maris cards available for collectors. The card features Maris kneeling in his Cleveland jersey with a stoic expression, typical of many of his cards. This card can be difficult to find in good condition, as many 1958 cards are plagued by printing issues. 1959 marked Maris’ only full season with the Kansas City Athletics. This card showcases Maris at bat, wearing a serious expression. This card would also mark the end of his association with Kansas City, as he would be traded to the New York Yankees with Kent Hadley and Joe DeMaestri the following season.

In 1959, Maris missed 45 games as a result of an appendix operation, and ended the season with 16 homeruns and 72 RBIs. Despite missing much of the season, Maris made his first All-Star game appearance representing the Athletics in the 1959. In his first year with the Yankees, Maris’ career began to gain more attention. He started the season with a single, double, and two homeruns in his first game with the Yankees. He ended the season with 39 home runs—one short of teammate, Mickey Mantle—and led the American League in run percentage, RBIs, and extra base hits. This also marked the year of Maris’ first American League MVP recognition, as well as his first World Series appearance. He was the recipient of a Golden Glove Award, and made his second consecutive All-Star game appearance in 1960.

This card uniquely features two pictures of Maris—a close up headshot, as well as a full body photo of Maris at bat. This card is essential for any Roger Maris fan. It represents the 1961 season marking a historic home run race between Maris and Mantle, which Maris ultimately won by breaking Babe Ruth’s single season homerun record with 61 homeruns in a single season. This was the same season in which Maris won his first World Series title with the Yankees, as well as his second consecutive American League MVP. He also took home the Hickok Belt award for the top professional athlete of the year.

This card features a mostly unremarkable dark photo of Maris with his typically serious expression, with a bat on his shoulder. This 1962 card represents Roger Maris at the height of his career. This is one of four Topps cards in circulation in 1962 to feature Maris, including card number 313, which features Maris making his record breaking 61st homerun the season before.

Card number 1, however, remains the most highly sought Maris card of 1962. It features all of Maris’ 1961 statistics on the back, coupled with a nearly full body photo of Maris at bat. The photo is thought to be one of his best.

This card can be difficult to locate in good condition, as its brown borders are particularly fragile. 1963 was a quiet year from the two-time American League MVP. Maris played in only 90 games this season due to a recurring back injury. He ended with 23 homeruns and a Yankee American League Pennant. He did make his third consecutive World Series appearance in ’63, but was sidelined during Game Two as a result of a reinjured back.

This collectable card features a close headshot of Maris donning the iconic Yankees uniform, as well as a smaller black and white image of Maris at bat. The coloration of the photo is dark, but the image is classic Roger Maris. This 1964 Roger Maris Yankees card features a close up photo of a contemplative Maris gazing into the stands while wearing the traditional Yankees uniform. It’s a visually simple card, with the front including only a single photo, Maris’ name, the Yankees team name, and his position listed as outfielder.

1964 proved to be a more successful season for Maris than the season before. Despite missing 20 games as the result of a leg injury, Maris completed the season having played in a total of 141 games, 71 RBIs, as well as 26 homeruns, including one in Game 6 of the 1964 World Series. 1965 was not Maris’ best year in the major leagues. The third week of the season brought a hamstring injury that caused Maris to miss 26 games. Upon his return, he injured his wrist sliding into home plate, keeping him out for the rest of the season. Maris made appearances in only 46 games this seasons, ending with 8 home runs and 27 RBIs. This wrist injury turned out to be a chipped bone, requiring surgery later that year. Despite the struggles of this season, the 1965 card remains sought after for those die hard Maris fans.

This card features a brightly colored photo of a grimacing Maris. The color quality of the card makes it very appealing. As a Roger Maris fan, this is an important card, as 1966 would prove to be Maris’ last season as a Yankee. He spent much of the season playing with a broken hand, which had gone undiagnosed. His relationship with the Yankees was shaky, and he would be traded in December of 1966.

This is another visually simple card donning a photo of Maris kneeling with an uncharacteristic smile, and red banners featuring the Yankees team name, Roger Maris, and his position as an outfielder. This can be a difficult card to locate in high quality, as many feature off center visuals with uneven white borders. 1967 represented Maris’ first year with the St. Louis Cardinals. Despite a regular season that was not representative of his earlier greatness, he helped the Cardinals win the pennant, and made a notable contribution to the team’s ’67 World Series appearance with one homerun and seven RBIs in Maris’ best World Series performance of his career.

What makes this card notable is Maris’ appearance with his new team. With a large amount of bright blue from the background, to the team name, and even Maris’ eyes, the card is a stark contrast to many of Maris’ earlier, brightly colored cards. It shows a close up photo of Maris grimacing, still wearing the Yankees pinstripes. 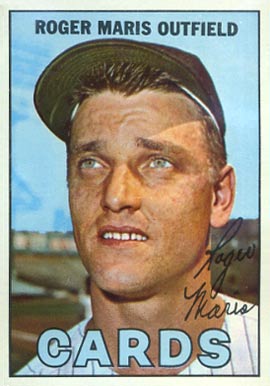 This 1968 card is essential to any Roger Maris collector, as it represents his final season in the league. Playing with the St. Louis Cardinals, Maris made the last of his seven World Series appearances, and he announced his retirement at the end of the season. He completed his career with a total of 275 home runs, 850 RBIs, and a career .260 batting average.

This final Roger Maris collector’s card is the only one to picture him in a Cardinals uniform. The card features a dark image of Maris at bat in the traditional red and white uniform, and bordered with a brown patterned design. In only 12 seasons in major league baseball, Roger Maris made a great impact. A four time All Star, Maris also made seven World Series appearances, more than any other player in the 1960s. He remains widely well known for breaking Babe Ruth’s single season home run record, despite some controversy surrounding the record.

Maris was slighted a Hall of Fame nomination in 1977, but was inducted into the North Dakota American Legion Baseball Hall of Fame, outside of his hometown of Fargo, in the same year. There has been a lot of controversy surrounding Maris being excluded from the Hall of Fame, as many argue that his 1961 performance should warrant induction. However, he still remains on the outside today.

In 1984, the Yankees honored Maris by retiring his number 9 uniform during a ceremony in which Roger Maris too part. His uniform is retired with a plaque referring to Maris as “A great player and author of one of the most remarkable chapters in the history of Major League baseball.”