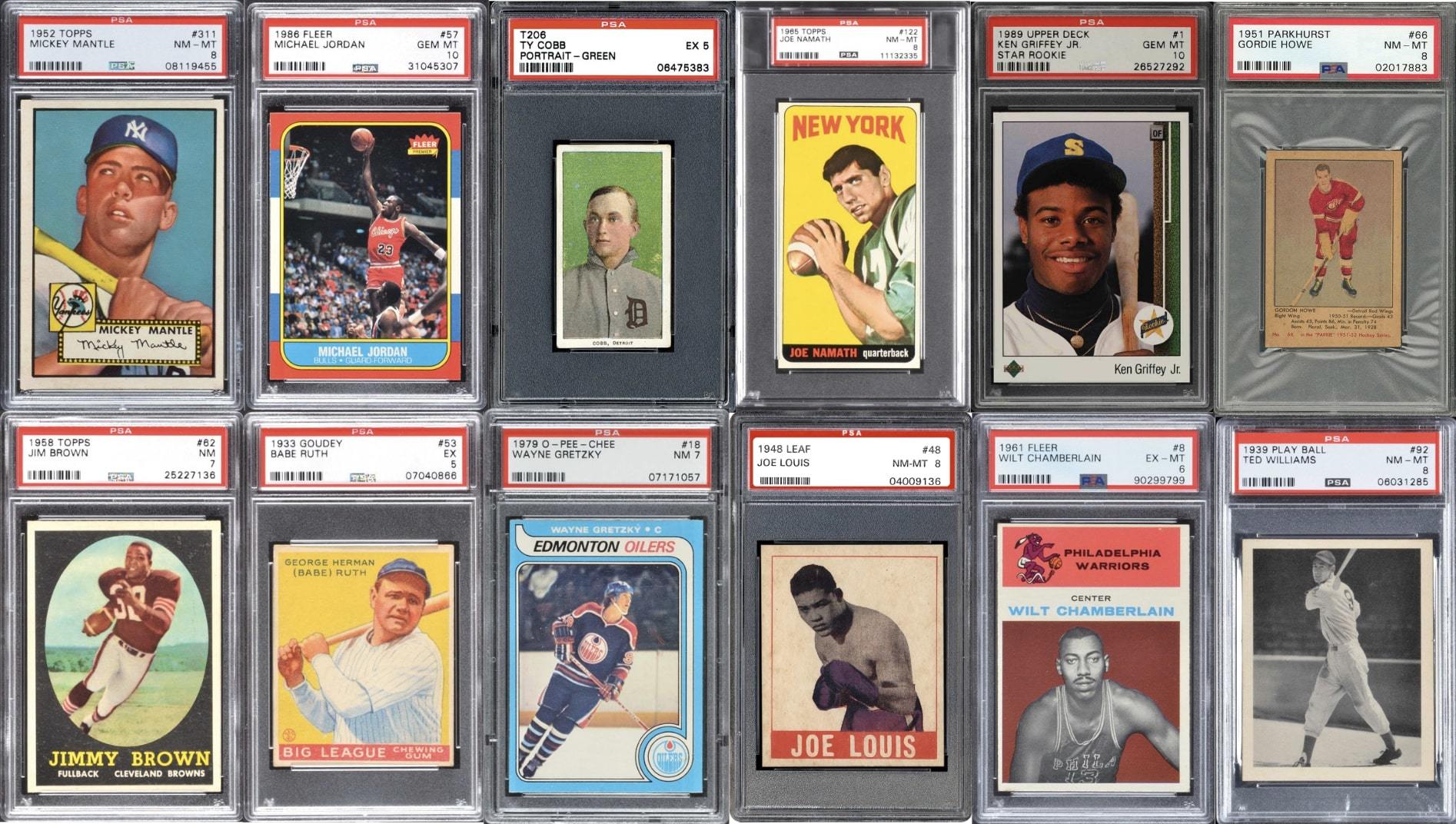 Over the years, PSA grading services have brought a critical and much-needed element to this hobby:

third-party opinions on the conditions of sports cards.

Why is that so important?

I can’t tell you how many times I have seen potential deals come and go because I, as a buyer or seller, could not agree with the other party on a card’s condition and therefore its value...

However, when a card is in a PSA holder (or “slab” as they’re often referred) then the confidence of both the buyer and seller increases dramatically.

Basically, PSA acts as the mediator in determining a card’s condition.

And buyers and sellers are usually more likely to transact as a result.

But, while this is the main idea for why PSA grades cards, there are many other reasons to consider using their services.

This hobby is flooded with reprint and counterfeit cards...

Many reprints were created to be cheaper alternatives to owning some of the more valuable cards that are out of most collectors’ budgets.

The mainstream companies like Topps have frequently released their very own reprints over the years but typically they mark them in such a way that they’re obviously not originals.

Where reprints can get trickier are when it comes to third party companies.

Some make it easy on us and clearly mark them as reprints.

For example, during the 1980's Renata Galasso produced reprints of various iconic baseball card sets like the 1933 Goudey set.

But, they clearly marked them as such and were definitely not trying to deceive anyone: Other third party reprints may not be so clearly marked but there are still ways you can tell they’re not originals.

At times, the backs will be completely different than the originals.

Or their edges will be perforated while the originals were cleanly cut.

So, reprints aren’t always created with malicious intent and are often easy to spot if you take a close look.

However, there are many blatantly counterfeited cards that were maliciously created for the sole purpose of ripping off unsuspecting buyers.

And the higher the value of the original card, the more likely it is to be counterfeited.

For example, some of the most frequently counterfeited cards that readers approach me about are the Michael Jordan rookie card, 1952 Topps Mickey Mantle, the infamous T206 Honus Wagner and old Ty Cobb tobacco cards:

If you look closely enough, you can still often tell the difference between the real cards and the fakes.

But, it is getting harder as the years go by and the counterfeiting quality increases.

Some tell-tale signs that you should always look for when examining the card would be:

Regardless if you're talking counterfeits or reprints, PSA card grading services can be an excellent tool to verify a card's authenticity.

That's not to say that PSA is correct 100% of the time and fakes don't occasionally slip through their hands.

But, if a card is in a PSA holder, you can be almost certain that it's the real deal.

There are many factors that influence sports card values.

And whether or not a card has been professionally graded can be one of them.

This doesn't mean that having a card graded by PSA will always increase its value...

Only certain cards in certain condition will see a significant boost in value if graded by PSA.

Generally, the older a card is and the better its condition, the more it makes sense to have it graded from a valuation standpoint.

Especially if it’s a Hall of Famer or other star player.

But, this statement is full of exceptions...

You'd really need to evaluate market sales data of a particular card to see if the cost to grade it could potentially be significantly offset by receiving a particular grade.

Let's look at some examples to better explain the thought process. 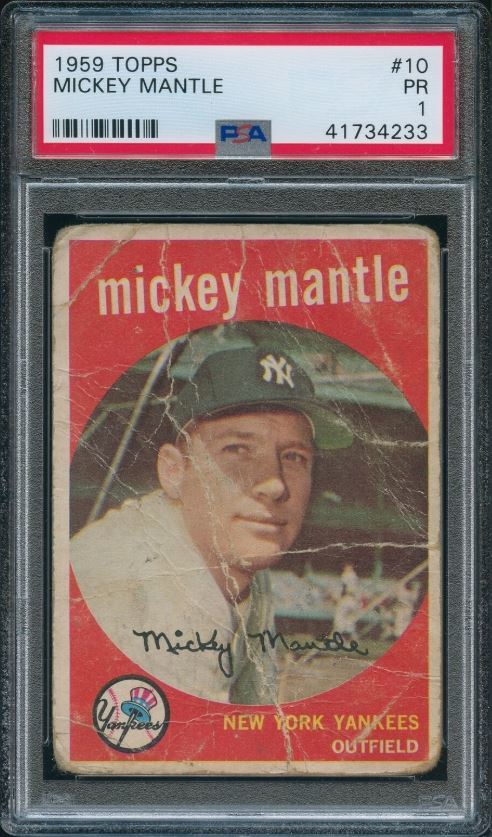 Personally, I would have never sent this card to PSA for grading.

Yes, the card is old and yes, Mickey Mantle is a legend.

But, because of the rounded corners, the numerous creases and wrinkles, and the additional surface damage, there would be no way this card would grade anything higher than PSA 1.

It's obviously in poor condition to the naked eye.

That means after paying the grading fees, shipping and insurance, and potential auction fees, you may net $40-50 if you sell it.

And you could sell the card for that much without grading it.

So, why did this card end up in a PSA holder, then?

Maybe the person who submitted the card for grading had other reasons for doing so--like some mentioned in the rest of this list. Now, this is an example of a card I would have definitely sent to PSA to grade.

All of these are characteristics of a mid to higher grade card in the PSA 5 to PSA 7 range.

But, had the person who sent it in for grading been lucky enough to receive a PSA 7 grade, then it’s a $1,300 card.

And in the worst-case scenario that the card would have received a PSA 5 grade, then it's still a $450 card.

So, this is a case where I think it made perfect sense to grade the card to try and boost its value.

The downside is minimal, and the upside is huge...

Are you a competitive person?

If so, then the PSA Set Registry could give you just the challenge you're looking for as a collector.

To track both the quantity and quality of your collections, PSA offers you their set registry.

The basic premise of how the set registry functions is as follows: In the above example, we have two different completed Lou Gehrig basic sets with the grade of each card in each set listed.

Along with the GPA, a final set rating is calculated by also taking into consideration the completeness of the collection and by assigning additional bonus points to any card that is the highest-graded example in existence. You can imagine what that concept of “winning” does to competitive collectors...

They will spend years and lots of money chasing high grade examples of cards to improve their sets in an attempt to own the finest set in existence.

I’ve seen people spend thousands of dollars for seemingly normal, average cards just because that card helped bump them up a notch on the leaderboard.

Clearly, the set registry keeps collectors chasing PSA-graded cards and driving up their values in the process.

I think it was an ingenious concept and business move on PSA's part...

And whether they did so intentionally or not, the PSA Set Registry is one of the reasons PSA-graded cards can be so valuable.

The set registry doesn’t have to be that cut-throat for everyone involved.

Many will complete sets just for the sheer enjoyment of doing so.

Wouldn’t it be great to easily interact with fellow collectors who simply share the same passion that you do?

Well, one of the most underrated benefits of the set registry is that it gives you the ability to network with fellow collectors with similar tastes as yours.

As a member of the set registry, you can share pictures of your collection and allow other members to contact you as well.

Just click on the camera icon to view another's collection and the mail icon to contact him or her by email: 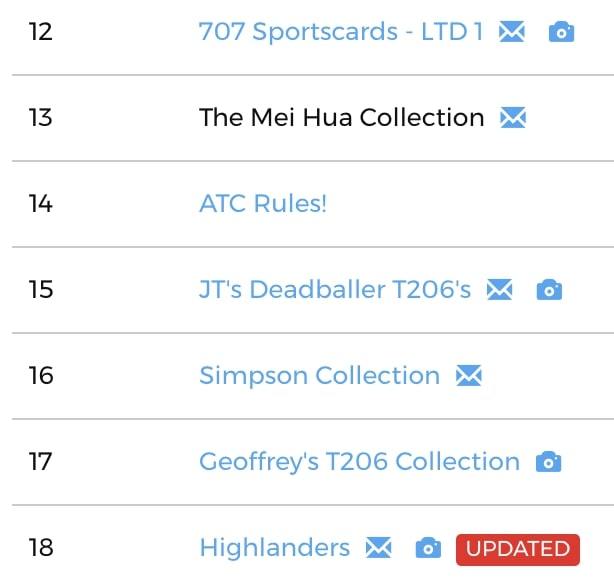 Many sets are completed simply by trading or selling between fellow set registry members.

Not all collectors are willing to exchange information or are open to the idea of trading.

That's why sometimes you won't see the camera or mail icon next to the collector's name.

But, in my experience, the set registry community has been overwhelmingly positive and I've made some great contacts I otherwise would not have.

There is nothing worse than seeing one of your most cherished cards become damaged.

Even the slightest wear and tear can significantly reduce a card's value.

Both monetary and sentimental…

Fortunately, the sturdy plastic design of PSA holders can greatly reduce the risk of damage to your cards.

Yes, the holders can crack or break if enough accidental or intentional force is applied to them.

And, no, the holders do not prevent discoloration from exposure to light since they are not UV-resistant.

But, if you're planning to store or handle your PSA-graded cards under normal conditions then their holders offer enough protection to do the job.

One of the things I like about PSA holders is that they were designed with storage in mind.

All four edges are indented in such a way that they can be stacked securely on top of each other.

This prevents them from slipping and sliding around and storage is much simpler.

And, while their holder designs have changed over the years, they all will fit together.

The see-through design makes observing the card simple and secure while the label quickly displays the pertinent information.

You can instantly know which card you are viewing and what its condition is professionally-evaluated to be.

And there are many great ways to creatively display your PSA-graded cards whether that be with individual stands, shelves or cases. 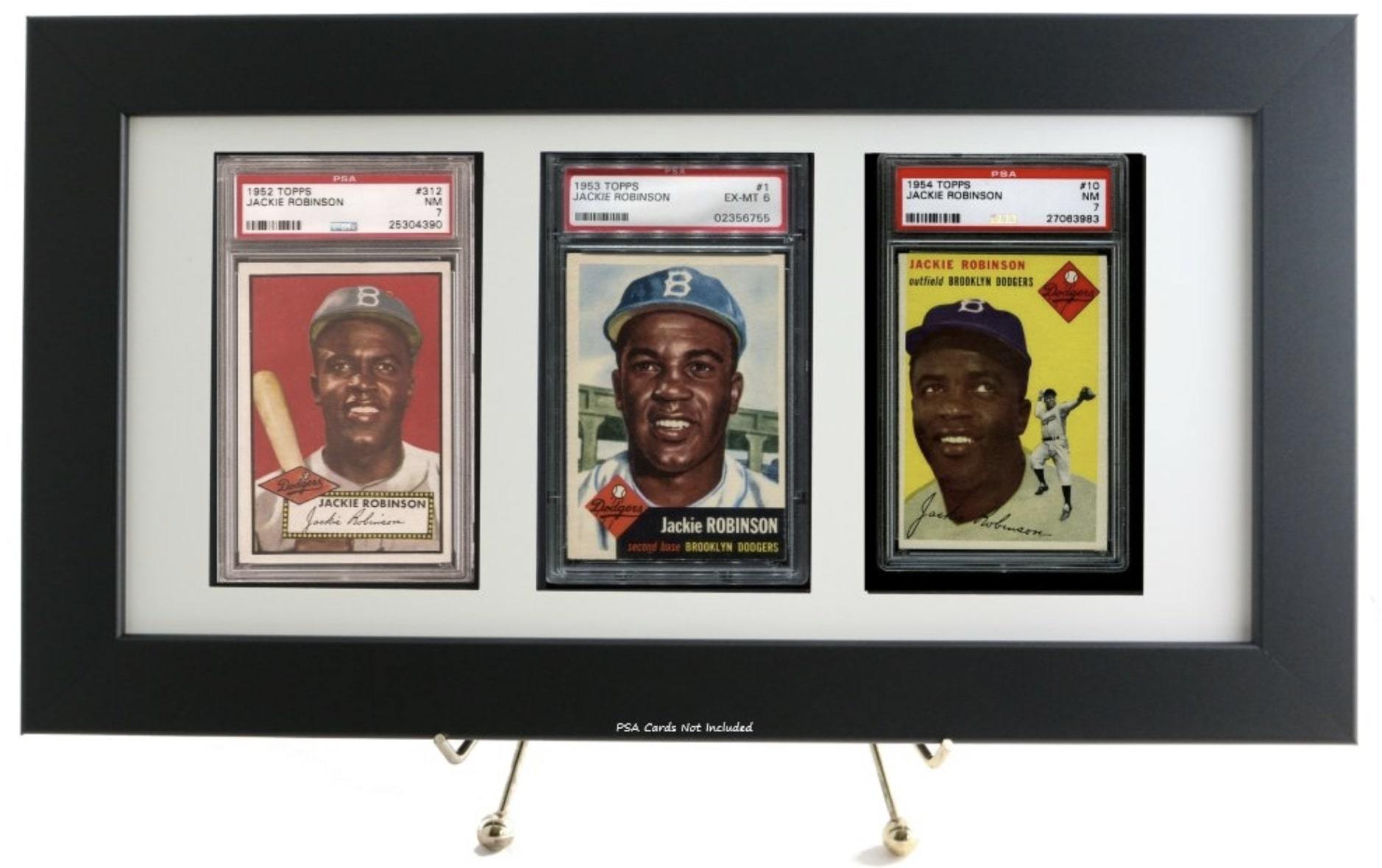 Individual stands can be a great way to show off a certain card you cherish.

Shelves and cases can be great ways to show off your collection in bulk.

I’ve seen many creative designs using wall-mounted shelves that do a fantastic job of presenting collections in a way that they can easily be enjoyed.

So, there you have it: my top 7 reasons why using PSA is a great idea for your collection.

Whether it's for protection, storage, potentially increasing their value, or simply making buying and selling your cards easier, PSA is a great option when it comes to third party grading.

What other reasons can you think of that I may have missed?