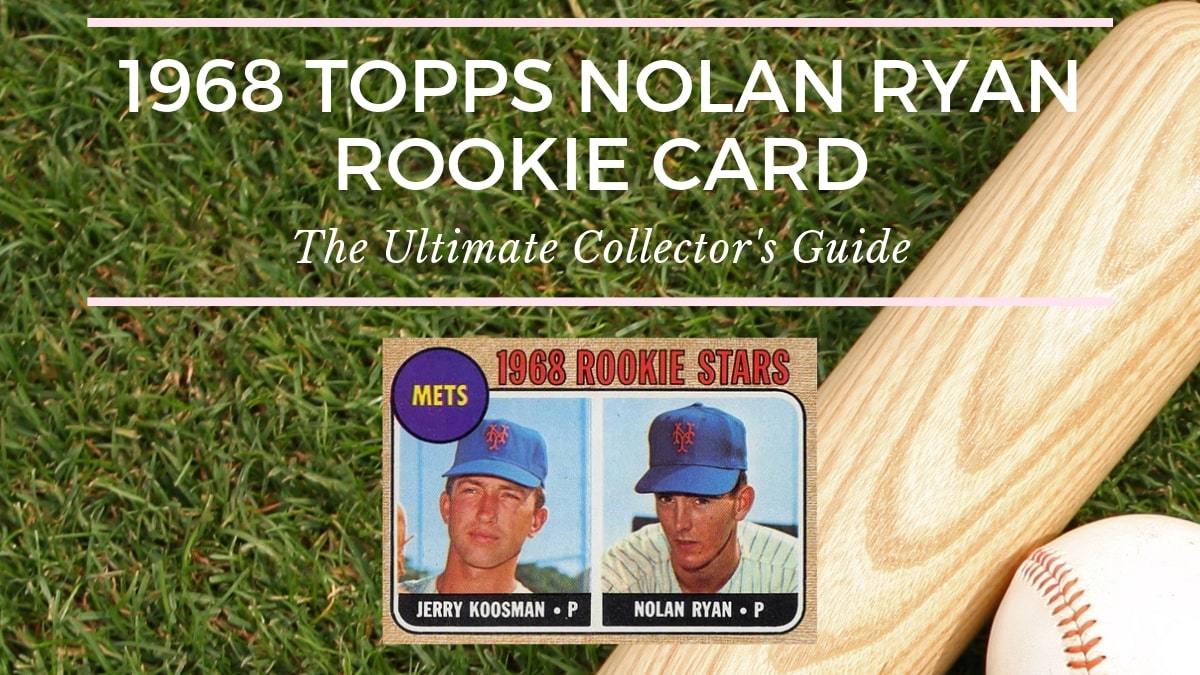 If you were to crown one baseball card as the king of the 1960's would you pick the 1968 Topps Nolan Ryan rookie card?

There are several great ones:

But none of those compare to the 1963 Topps Pete Rose rookie and 1968 Topps Nolan Ryan rookie.

And between those two, I'd say it's very close but eventually I'd have to crown the 1963 Topps Pete Rose rookie as the best and most important card of the 1960's.

That said, the 1968 Topps Nolan Ryan rookie is an incredible card and one of the hobby's most valuable baseball cards.

And to make things even more challenging, there are three other versions of his rookie card printed separately for collectors to chase.

Most vintage stars have only one rookie card to their name.

Hank Aaron.  Roberto Clemente.  Sandy Koufax.  They all have just one rookie card.

And sometimes you’ll see players like Stan Musial and Warren Spahn, for instance, with two types of rookie cards.

But Nolan Ryan collectors get four different rookies to collect.

Here we explore all four of them. Let’s start with the 1968 Topps version first: Distinction: This is easily the most important of the four versions of his rookie card on this list and the most desirable Nolan Ryan card in the hobby. The others may be more rare but this one is in far more demand. Like many sets in the 1960’s, the 1968 Topps rookie cards featured multiple players. In this case, Nolan Ryan shares his rookie with Jerry Koosman.

Number: This is card #177 which means it is not one of the high number series cards (#458 – 598) in the set. As you know, high number cards are more scarce. So had his been a high number card, that would have surely boosted its value even more.

Design: The 1968 Topps baseball cards are instantly recognizable by their burlap-colored borders. Rookie cards like that of Nolan Ryan were printed in a horizontal layout and featured a split-window image of two rookies from each team. A large purple circle with the Mets team name in yellow compliments the card in the upper left corner.

The reverse side of the card was printed vertically and featured brief biographies and stats of both Koosman and Ryan. A golden border rounds out the fairly straightforward design. Condition Issues: The entire 1968 Topps baseball card set is one of the better-printed vintage sets so finding Ryan rookies in high grade is relatively easily. That doesn’t make them cheap, though, obviously. But if you do encounter condition issues usually it’s poor centering or wear and tear showing easily along those burlap-colored borders. Any non-white card border poses that risk and this card is no exception. Distinction: Milton Bradley dominated the board game market in the 1960’s and in 1968 they contracted with Topps to produce a new “Win-A-Card” trading card board game.  The game would feature select cards from Topps’ 1968 baseball card set as well as selections from there Hot Rods and 1967 Football issues. In total, the set is composed of 132 cards: 77 baseball, 33 football and 22 hot rod cards. It is not known why those 77 particular baseball cards were selected for inclusion in the set but thankfully Ryan’s rookie card made the list.

Design: There are a couple of things that easily distinguish this version from the regular Topps issue. The first is a thin white print line across the left side on the card’s front. I chose to include a picture of a graded copy above so you could see the line more easily. These come from the cut between the overlapping borders of a Milton Bradley football card that had a white background. But the easiest and most noticeable is the bright yellow color of the card’s back. It is completely different from the golden coloration of its Topps counterpart and a dead giveaway. Here the Milton Bradley version is on the left and the regular Topps version on the right: Condition Issues: Remember that these cards were part of a game where the object was for kids to pick up cards based on the random result of the spin of a dial. All of that handling increases the chance that you’ll find these rookies in poorer condition. On top of that, Milton Bradley secured the cards with a rubber band and packed the cards in a tiny box. If the Ryan card was at the top or bottom of the stack, that rubber band increases the chances you’ll see the card with an indentation.

Estimated Worth: It’s tough to say but lower grade copies will sell for hundreds of dollars while a PSA 8 graded copy can fetch $7,000 or more. Prices fluctuate wildly for these cards. Distinction: Only the first 370 cards of Topps’ 1968 baseball card set were released in Venezuela–fortunately, Nolan Ryan’s #177 was one of them. The Venezuelan cards are far more scarce than the mainstream Topps issues making them highly collectible.

Number: This is again card #177 but again, only 370 cards in the total set were produced for the Venezuelan market.

Design: The Venezuela version looks exactly like the others but was printed on poorer quality, non-glossy card stock. Another dead giveaway is the phrase “Hecho En Venezuela” along the card’s reverse side signifying that it was “Made In Venezuela”. Condition Issues: Any Venezuela Topps card in any set will be much tougher to find in high grade than its USA counterpart. They were all printed on lesser quality card stock making them less durable. Venezuelan cards are nearly impossible to find in conditions greater than EX.

Estimated Worth: Venezuelan Nolan Ryan rookies can be worth thousands of dollars even in low grade. A copy graded as PSA 4.5 VG-EX condition sold for $18,880 in late 2016. Distinction: The O-Pee-Chee versions were printed in Canada and can be tough to find. O-Pee-Chee was a confectionery company to which Topps granted a license to print many of its card designs over the years.

Number: This is again card #177 but only cards #1-196 of the set were released in Canada which means Ryan barely made the cutoff.

Design: The overall design is the exact same as the regular Topps issue but the card stock is lighter and a note in the lower right corner on the reverse side reminds us it was printed in Canada. Later versions of O-Pee-Chee cards, especially hockey cards, have the O-Pee-Chee name printed somewhere on the card itself but that was not the case here. Condition Issues: The lighter paper stock does expose it to more wear and tear. Centering is also a tough issue to watch out for.

Estimated Value: Even in bad shape the cards will sell for hundreds of dollars because you just don’t see them too often. A PSA 8 copy sold for just under $7,000 in 2016.

Nolan Ryan had an amazing career and finished as one of the game’s most dominant pitchers of all-time.

Hitters were often uncomfortable facing him at the plate just because of the sheer velocity at which he could throw the ball.

On the flip-side, he feared no one. Just ask Robin Ventura!

His career spanned across four decades and four different teams: the Mets, Angels, Astros and Rangers but the Cooperstown recognizes his primary team as the Angels.

Ryan was an incredible pitcher and was deservedly inducted into the Baseball Hall of Fame in 1999. His legacy is cemented forever and owning a Nolan Ryan rookie card is a great way to commemorate him in your personal collection.