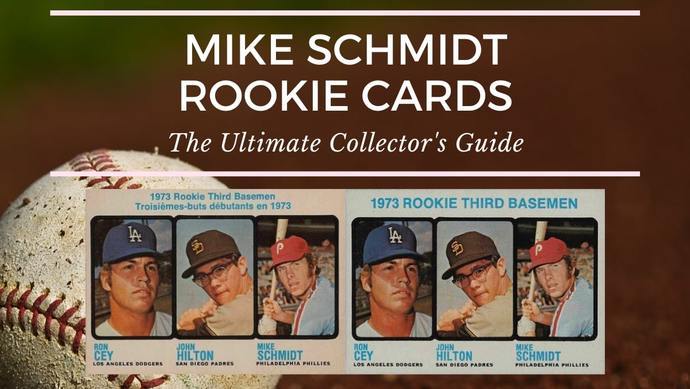 Of all the great baseball cards made during the 1970s, the Mike Schmidt rookie card certainly stands out as one of the decade's best.

It's not entirely his rookie card all to himself, though...

Ron Cey and John (Dave) Hilton also share in the spotlight of this hobby favorite.

The 1973 Topps set itself has never been one of my personal favorites but I have always been a huge fan of the Schmidt rookie.

How could you not be?

He was simply one of the best, if not the best, third baseman ever to play the game...

And this guide I go over everything you need to know about collecting his rookie cards.

As far back as the 1930s, O-Pee-Chee began making sports cards to promote their candy products.

But, their baseball card sets were few and far between until the mid-1960s when they reached an agreement with Topps to act as their counterpart for the Canadian market.

From that point on, the O-Pee-Chee brand was a regular staple in the baseball card hobby through the 2000s.

For every great Topps card, there was an O-Pee-Chee counterpart that left hobbyists with two fantastic options to collect.

These O-Pee-Chee cards bore a striking resemblance to their Topps cousins but had unique features all their own.

The O-Pee-Chee Mike Schmidt rookie card, for example, it's almost identical to its Topps counterpart, but there are a few notable and apparent differences. Distinction: Intended for distribution in the Canadian market, Schmidt's O-Pee-Chee rookie is the most valuable in the set.

Front Design: The front of the card features a horizontal layout to make room for Schmidt, Ron Cey, and John (Dave) Hilton.

Hilton's career lasted just four seasons, while Ron Cey enjoyed a successful 17-year career with multiple teams, most notably the Dodgers, with whom he made six trips to the All-Star game and picked up a World Series MVP along the way.

However, being the only Hall of Famer in the trio and arguably the greatest third baseman who ever played, Schmidt is the star of the show on this card.

While the top contains the same "1973 Rookie Third Basemen" text as his Topps rookie card, it's printed in a much smaller font size to make room for the French translation, making this one of the easiest ways to distinguish it as his O-Pee-Chee rookie.

Back Design: With a vertical layout, the reverse side features each player's personal information stacked on a gold background.

Again, you see the French translation across the top as well as the O-Pee-Chee mark across the bottom.

The term "Printed in Canada" gives the nod to London, Ontario, where O-Pee-Chee was headquartered.

The black borders provide a stark contrast to the gold background but can easily show wear and chipping.

Condition Issues: The biggest challenges collectors face are centering and tilt on the front side as well as the ease of wear showing on the black borders of the reverse.

Also, the print quality of O-Pee-Chee cards has always been notorious for not being quite as good as that of Topps. Distinction: Schmidt's Topps rookie card is the more desirable of the two being that the U.S. sports card market and most collectors have always preferred Topps to O-Pee-Chee.

The 1973 Topps set was the last time the company released its cards in series, making this card one of the last great "high number" cards as it was part of the 5th series (cards #529 - 669) that year.

Traditionally, Topps produced relatively fewer of their "high number" cards in any given year as they were typically released later in the year around the same time Topps football cards began appearing on shelves.

That "high number" distinction gives his rookie card a boost in value.

Front Design: As I mentioned earlier, the only real difference in the front design of his Topps rookie is the absence of any French translation.

Because Topps printed its cards on higher quality stock, they can have a brighter appearance to them as well.

Back Side: Again, the only real difference you'll see between the reverse of his Topps card is the absence of French text as well as the Topps mark and "Prtd. in U.S.A." along the bottom. 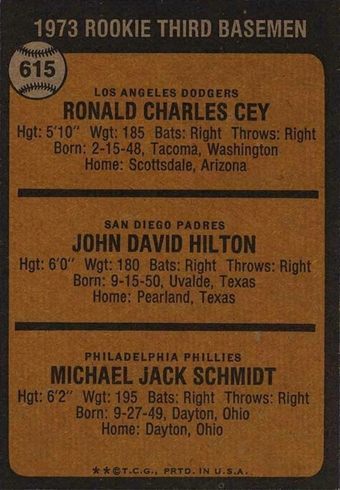 Condition Issues: The quality of the cardboard stock used for these cards was better than their O-Pee-Chee counterparts but the same challenges concerning centering and wear showing along the black borders of the reverse still apply.

While they're not considered mainstream rookie cards by most hobbyists, Schmidt did appear on a few other cards in 1972 and 1973.

His earliest and one of his most challenging to find is his 1972 Puerto Rican League Sticker features him as a member of the Caguas ball club of the Puerto Rico Professional Baseball League winter league. Like many players of that era, Schmidt spent time playing winter ball in the Caribbean to work on any kinks in his game before the start of the Major League season the following Spring.

The front of the card features Schmidt in a simple pose from the waist up wearing his Caguas uniform while the reverse features a bit of information on his past performance and affiliation with the Phillies.

Printed in Spain, the reverse was printed in Spanish to prepare them for distribution in Puerto Rico.

These cards are tough to find and are more expensive than his O-Pee-Chee and Topps rookies. Like many baseball teams, the Phillies produced a set of team issue cards to commemorate their 1973 season.

In this case, they printed two versions: an "early season" as well as a "late season" version.

His "early season" card features a black and white portrait of the young slugger in his Phillies uniform with a facsimile signature across his chest. The "late season" version features a similar image of Schmidt but his hair is noticeably longer and the photo is clearer overall.

Both of these team issue cards are tough to find in high grade as the paper on which they were printed was delicate and easily damaged.

Inducted into the Hall of Fame in 1995, Mike Schmidt is widely-considered the greatest third baseman of all-time.

His ability to hit with power and his finesse with the glove made him a rare combination of an offensive and defensive threat.

Schmidt's 548 career home runs, six Silver Sluggers, and ten Gold Gloves summarize quite nicely just how lethal he was with both the bat and glove.

His career batting average of .267 is the only slight knock on his stat lines, but he more than made up for it with production, leading the National League in home runs eight different seasons and RBI four times.

Over his incredible career, he would accomplish the following:

Schmidt's legacy at third base is nearly unmatched and his rookie cards will remain some of the most sought-after from the 1970s for years to come.