One of the most recognizable basketball cards in the hobby, the 1986 Fleer Karl Malone rookie card continues to be in high demand.

But, would you expect anything less from the game's second all-time leading scorer?

Known for his incredible consistency, Malone rightfully earned the nickname "The Mailman" on his way to becoming one of the game's greatest scorers and rebounders in history.

Together with teammate, John Stockton, he was all but unstoppable and quickly became one of the game's premier superstars of his era.

That said, here is a comprehensive guide that covers the key things you should know before you buy or sell his rookie card.

Are you selling 1986 Fleer basketball cards?

The value of a Karl Malone rookie card will vary between $1 and $2,000 depending on its condition and whether it is has been professionally graded.

In the table below, you'll find some estimated prices of each of his 1986 Fleer issue in conditions ranging from near-mint (PSA 7) all the way to gem mint (PSA 10) as determined by third-party grading company Professional Sports Authenticators (PSA).

Remember, for a card to achieve PSA 10 status, it should boast fantastic centering and display no damage to the corners, edges or surfaces.

In other words, it has to be pretty much flawless.

While he did appear on an earlier card from 1984 (I'll get to that later), Fleer was the first mainstream card manufacturer to produce a card that featured Malone.

The set itself is loaded with Hall of Famers and rookie cards of some of the greatest basketball players of all-time, but Malone is still one of the keys. Design: To say this set is one of the most easily-recognizable in the hobby would be an understatement.

The red, white and blue borders provide an overall patriotic look and feel while the thin, curved yellow inner border is a perfect complement.

Fleer decided on a somewhat underwhelming image of Malone for this card as he's merely dribbling up the court instead of something more exciting like dunking or rebounding.

But, it's hard to complain too much...

The old Jazz logo, jersey and those multi-colored socks bring back so many memories of an NBA era that was so fun to watch.

I always loved that logo and was happy to see the team switch back to it again a few years ago.

Reverse Side: Like the front, the reverse side of the card is also printed in a vertical fashion and is split into three primary sections.

The top features the Fleer logo, Jazz logo, and Malone's card number while the middle gives a nice summary of his personal information and statistics.

The lower part of the card is rather empty but does contain key copyright data of the NBA, NBPA and Fleer along the bottom border. 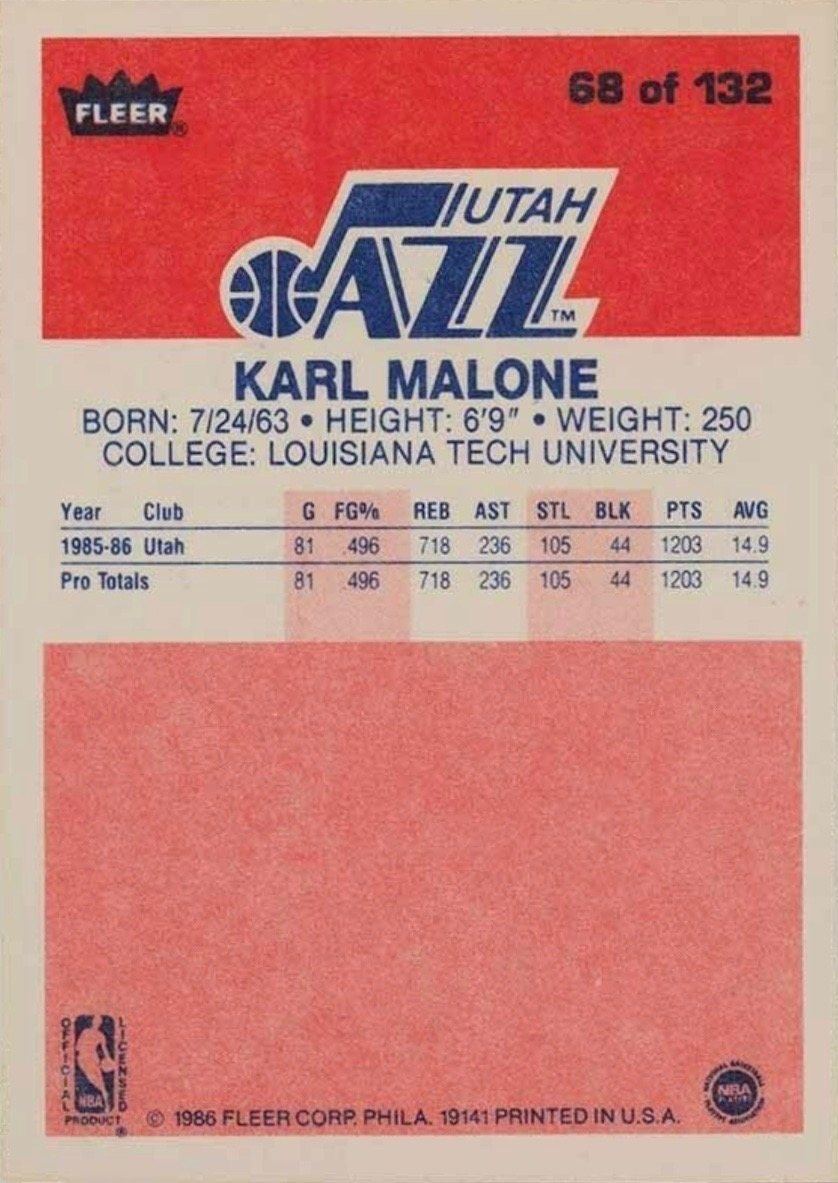 Condition Issues: Like many cards of the era, centering is a tough challenge with this card as quality control then isn't what it is today.

Also, even though they are colorful and fun to look at, the borders will also easily show wear and chipping.

Inducted into the Hall of Fame in 2010, Malone is widely considered one of the most dominant power forwards who ever played.

He currently ranks second all-time in scoring and seventh in rebounding, which is an incredible achievement.

Night in and night out, he and teammate John Stockton utilized the "pick and roll" to perfection, devastating opposing defenses in the process.

While simple on the surface, nobody could stop it when Malone and Stockton were involved.

That simple play is largely why Malone is second all-time in scoring and Stockton ranks first (by a long shot) in career assists: it was nearly automatic.

Over his impressive career, Malone would achieve the following:

Few brought the kind of leadership, effort, work ethic, and love for the game of basketball as Malone did, and collectors will always covet his rookie card as a result.