If you collect Gale Sayers football cards then you know one thing’s for sure:

There just aren’t too many of them to collect.

The legendary “Kansas Comet” had a dominant but short career. Hence, the relatively low number of Sayers cards to collect.

Sayers was not a bruiser. He was a graceful back who possessed an uncanny ability to find running lanes and make tough cuts. Sports writers even dubbed him “the football version of the three-card monte“.

Fortunately for collectors, his cards are not as elusive as he was.

Because Philadelphia Gum won the contract to be the exclusive printer of NFL trading cards from 1964 to 1967, card #38 in the set is the only recognized Gale Sayers rookie card in the hobby.

Most collectors consider the entire set to be one of the better looking sets in the hobby and Sayers’ card is no exception.

A young Sayers is presented posing in a long, graceful stride ready to stiff-arm any would-be tackler.

Along with the Dick Butkus rookie card, the Gale Sayers rookie is a key to the set.

Despite the fantastic imagery of the card, you’ll frequently encounter off-center printing and diamond cuts.

Sayers would set a career high for rushing yards in 1966 with 1,231 but his touchdown mark dropped significantly from 22 during his rookie campaign down to “just” 12. 1967 was the end of the line for Philadelphia Gum football cards as Topps would win contracts to print cards of both AFL and NFL players starting in 1968.

The Gale Sayers card was once again a key to the set, easily distinguished from previous Philadelphia Gum sets with its striking yellow borders.

Although you’ll notice that his name, team and position info have been moved from the top of the card to bottom, the image on his 1967 Philadelphia Gum issue is the same as the year prior–albeit zoomed in more closely. Topps was back on the scene in 1968 releasing a set that included players from both the NFL and AFL.

Because this is Sayers' first Topps card, it is very popular among collectors. While the Bob Griese rookie card is the most sought after in the set, Gale Sayers is once again a key to the set.

A determined and focused Sayers dominates the front of the card although he's a bit off-center.

The design of the card is simple and straightforward giving it a nice clean look.

The team logo in the upper left along with the thin blue borders add a nice touch. Sayers had started off 1968 with a bang, leading the league in rushing through the first nine games; however, he would suffer a right knee injury that would knock him out for the rest of the season. 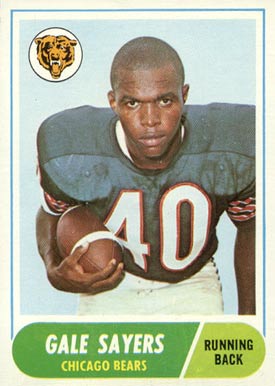 The cards featured very bright and sharp color schemes; those in the first series, like Sayers', were without borders while those in the second series had a white border.

Sayers' card shows the Hall of Famer in another determined running pose surrounded by a hot pink background.

The lack of borders make Sayers' card and others in the first series very susceptible to showing wear and chipping.

Back from injury for the 1969 seasons, Sayers led the league in rushing once again with 1,032 yards but the injury had clearly affected him as he lacked the blazing speed he once had.

Fittingly, Sayers was named the NFL's Comeback Player of the Year in 1969. 1970 was a key year for football as the NFL and AFL finally merged their operations and schedules.

Unfortunately, Sayers would suffer yet another season-ending knee injury in 1970, this time to his left knee, that would effectively begin the end of his career.

The 1970 Topps Gale Sayers football card is a very nice looking card. Although the set isn't as popular with collectors as those before it in the '60s, the tan backgrounds and oval-shaped image crops make for a pleasant look and feel.

Collectors most often search for the O.J. Simpson rookie card but Gale Sayers is unsurprisingly very popular as well.

The set is offers centering challenges for collectors as there were many miscuts throughout the set. Sayers appeared in just two regular season games in 1971 after attempting an unsuccessful comeback from his previous year's injury.

Topps would feature him in their instantly recognizable and incredibly difficult 1971 set.

However, nicks and wear along the colored borders, rough cuts and poor centering plague the set making it easily one of the more difficult sets to find in high grade. Sayers' card is no exception.

But, while the Terry Bradshaw and "Mean" Joe Green rookie cards are the keys to the set, the 1971 Topps Gale Sayers card is unquestionably a huge collector favorite. Sayers appeared in just two regular season games in 1971 after attempting an unsuccessful comeback from his previous year's injury.

Topps would feature him in their instantly recognizable and incredibly difficult 1971 set.

However, nicks and wear along the colored borders, rough cuts and poor centering plague the set making it easily one of the more difficult sets to find in high grade.

Sayers' card is no exception.

But, while the Terry Bradshaw and "Mean" Joe Green rookie cards are the keys to the set, the 1971 Topps Gale Sayers card is unquestionably a huge collector favorite. Gale Sayers was one of the most prolific runners in the history of the game. His speed and quickness aggravated defenders and delighted fans (Bears fans anyway) for years.

A Pro Bowler in each of his first five seasons, Sayers turned in one of the most dominant rookie seasons the game has ever seen. He sliced and diced his way to 2,272 all-purpose yards and an amazing 22 touchdowns–a rookie mark that still stands today.

His magical moves and amazing kick/punt returns were electric. A four-time Pro Bowler, Sayers finished with 9,435 combined net yards, 4,956 rushing yards and 336 points scored. In 1977 at the age of 34, he remains the youngest player ever to be inducted into the Pro Football Hall of Fame.

His popularity among collectors is forever cemented in the hobby as his cards continue to be some of the most sought after of any player. It's unfortunate that there are so few Gale Sayers cards to collect but those that exist bring a lot of joy and excitement to collectors.