When it comes to the pre-War segment of the hobby, Cy Young baseball cards will always be among the most desirable.

He is a baseball icon and set the standard for pitchers...

After all, you have to be pretty good to have an award named after you that's given out to the best pitchers year after year.

So, there should be no surprise that Cy Young cards are consistently atop the list of key cards of all the major pre-War sets.

And some of his cards are even among the most valuable baseball cards of any era.

So, in honor of the legendary pitcher, I've developed this list of the most important Cy Young cards you can collect.

Designed as a deck of playing cards in the style of a baseball game, these cards were issued in 1906 by the Fan Craze Company of Cincinnati. Young is one of thirteen Hall of Famers who appear in this set of 54 cards in total. And because it was released early on in the 1900's, it is one of a very few sets to contain players from both the 19th and 20th centuries. A portrait of Young rests in the center of the card with "Hit by pitcher." written across the top to signify the particular action represented by his card in the game. These 1-7/16" discs were distributed in five-cent Colgan's Mint and Violet Chips gum tins over a three-year period from 1909-1911. The black and white image of Young is surrounded by both his name and the Cleveland team name on either side of his head. He is one of 21 Hall of Famers to appear in this set that is filled with variations ranging from misspellings, team name changes, different portraits and different color schemes. However, Cy Young's disc is one that escaped having different variations and appears only in the form you see below. Up next on our list is the "Boston" version of Young's 1909 American Caramel card, one of the most iconic pre-War sets in the hobby. This is one of many cards in which you'll see this portrait of Young originally created by well-known photographer Carl Horner. The rich red background provides a nice contrast to help Young stand out in his Boston uniform. These are among his more expensive cards that you'll come across. Prior to the start of the 1909 season, Cy Young was traded from Boston to Cleveland. But, by the time the American Caramel Company could change over their printing sheets to update Young's status as a member of Cleveland, most copies made it into circulation in their "Boston" form shown previously. That said, these versions are scarcer than their Boston counterparts: maybe 20% or so in existence are the Cleveland version. That also makes them more expensive than the Boston versions on a grade-for-grade basis. When it comes to pre-War cards, the T206 set is hands down the king of them all. And while the Honus Wagner card may be the most iconic and expensive of all the T206's, the Cy Young "portrait" card is also high up on the list of the most desirable. This is one of three cards in the set to feature Young and again we see the iconic portrait pose seen across many other Cy Young cards. I've always loved the green background of this card and feel it really helps to give a classy feel to it. Because they're so tough to find in high grade, mint condition examples of this card will set you back six figures while lower grade versions can be had for less than $1,000. 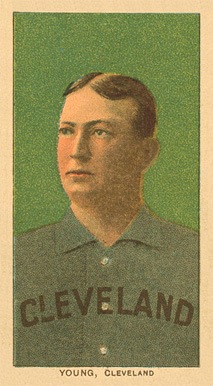 Next up from the trio of T206 Cy Young's is the "Hand Shows" version where Young is depicted doing what he did best: pitching. The multi-colored background really makes this card pop and many collectors consider this to be his best-looking T206 card. It's not quite as valuable as the "Portrait" version, however. Still, high grade examples of this one can also set you back six figures. The last T206 Cy Young, the "Glove Shows" version, is not nearly as desirable as the other two which is reflected by its lower value. The color scheme is kind of bland compared to his other T206 cards. I do like that he is shown pitching and the image of him looking straightforward at the viewer is something hardly ever seen on his other cards. One of Young's most vibrant cards, his E93 Standard Caramel issue is another one of his most highly-desired candy cards. The set itself is fairly small as it contains only 30 players of the era. Like many sets in which he was featured, Young is one of the top four key players to collect along with Honus Wagner, Ty Cobb and Christy Mathewson. I've always thought it was interesting that Young was depicted batting instead of pitching. Regardless, this iconic card possesses stronger eye appeal than many of his other cards. Interestingly, Cy Young is not pictured on this card--it's actually an image of Irv Young, another pitcher who played six seasons during the early 1900's. This is one of those instances where this type of error doesn't drastically affect baseball card values since it was never corrected. Had some of these made it into circulation with Cy Young actually depicted then these with Irv Young shown instead would certainly get a boost in value. You can find these cards with one of three background colors: red, blue, and green. These 1-3/8" by 2-5/8" cards were produced on thin paper stock making them incredibly susceptible to damage. Adding to that, many of these had to be folded vertically in order to fit into the pack of gum. Young is one of eleven Hall of Famers to appear in this set of 50 different players. The front image is the same we saw earlier on the 1909 American Caramel issue but the back makes it instantly distinguishable. Not only did the American Tobacco Company produce trading cards, they also produced these 7/8", sepia-toned pins to commemorate many players of the day. The set is riddled with players who can be found in two different variations: "Large Letter" and "Small Letter" types. Both versions are shown below. The "Small Letter" version shows one image of Cy Young with a "C" on his cap while the "Large Letter" version features a completely different image and lists "Old Cy Young" as his name. The reverse sides of these pins can easily show wear to the paper ad insert inside the disc and due to rusting around the borders. One of the most popular caramel cards, the E94 issue features the legendary Cy Young in a pitching pose set against a any one of seven different background color variations of the set. Two oddities stand out on this card. First, he is identified as “Old” Cy Young along the bottom border of the card. Second, the image of Young used on this card pictures him in a Boston Red Sox uniform even though he is identified with Cleveland on the card. These cards were produced by the George Close Co. of Cambridge, Massachusetts. Back again is that familiar portrait of Cy Young although this time it appears in full-color. The pastel-colored background of the card also gives it a more calm and cool feel. The cards in this set were distributed to subscribers of "Sporting Life" magazine in 12-card lots across 24 different series. Cy Young's card can be found with its back printed in either blue or black ink. The 1911 T3 Turkey Red Cabinets cards are considered by many collectors to be among the most beautiful baseball cards ever produced. And I'd have to agree. Measuring in at 5-3/4" by 8", they were much larger than other cards of the era. Customers who bought cigarettes from one of three companies, Turkey Red, Old Mill or Fez, could send in coupons in exchange for the cards. This is arguably the best-looking Cy Young card you can find. The T205 set is one of the most iconic pre-War issues and featured player images inside gold borders that can be susceptible to showing wear quite easily. Many players, like Young, were also depicted atop a baseball diamond backdrop with tools of the sport scattered along the bottom as well. High grade examples can be tough to locate and will easily cost into the five figure range to acquire. Cy Young baseball cards are at the top of most every pre-War card collector's want lists and for that reason their values will continue to remain strong for quite some time.

Young's achievements as a pitcher are jaw-dropping.

He won 2 games in the first World Series which helped lead Boston to victory.

He led the league in wins, strikeouts and ERA in 1901 which would earn him a pitching Triple Crown.

And he even threw the game's first perfect game.

But, some of his achievements which will likely never be surpassed are:

The way the game is played, and more importantly the way pitchers are used, has changed drastically since his time.

But his list of stunning achievements are exactly why the best pitcher from each league is awarded the "Cy Young Award" each year in his honor.

There's no question that Young's place in the hobby is held in high regard and collectors will go to great lengths and pay extraordinary prices to chase down his cards.