While any Mantle card from his playing days is highly desirable, the 1965 Topps Mickey Mantle consistently ranks among collectors as one of his best of the 1960s.

The imagery of The Mick following through on his swing and staring off into the distance in his Yankee pinstripes gives the card fantastic eye appeal.

Combined with the pink border and the calm mood of the practice session occurring in the background, the card almost has a calm and easygoing vibe to it.

But, we all know that Mantle was anything but calm at the plate as he was capable of blasting towering home run shots seemingly with ease. 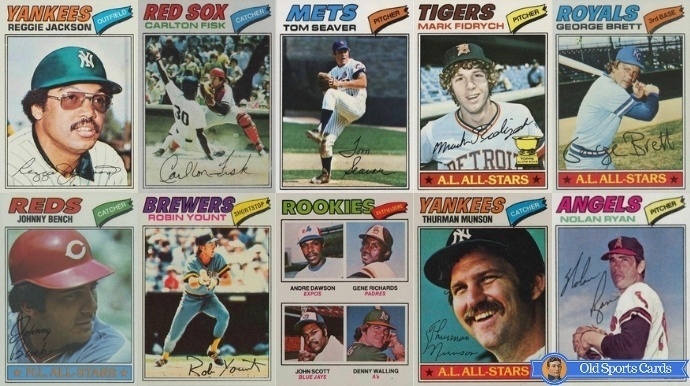 Of all the vintage sets in this hobby, the 1977 Topps baseball card set is often one of the most frequently overlooked.

And somewhat unfairly, in my opinion...

But the checklist is loaded with Hall of Famers and colorful eye appeal.

And the 1977 baseball season itself was one of the most interesting of the decade, packed with headlines like the Tom Seaver trade, turmoil in the Yankees clubhouse, and a surging Los Angeles Dodgers squad.

Whether you're a big fan of this set or not, it does pack a lot of nostalgia in its 660-card checklist.

And in this guide, I'll run through the thirteen most valuable. 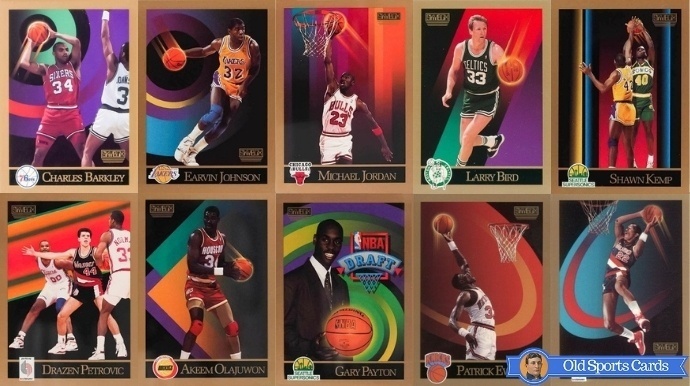 If you laid any single 1990 SkyBox basketball card on the table, almost every collector in the hobby of that era would instantly recognize the design.

There was simply nothing else like these cards on the market at the time...

The gold borders and futuristic-looking graphic designs in the backgrounds jumped out at collectors in a way no other basketball card set had before.

And the timing of this set's release was impeccable.

Michael Jordan was making a run at his first NBA Championship, but the Lakers, Celtics and Pistons weren't giving up without a fight...

As NBA basketball continued to explode in popularity, collectors pounced on this set.

And in this guide, we look at the 20 most valuable in today's market. To commemorate the AFL and NFL merger of 1970, the 1971 Topps football card set delivered a bright and vivid design that helped collectors easily distinguish between players from each conference.

Red borders surrounded AFC players while NFC players found themselves in a sea of blue.

Oh, and All-Stars had borders that were divided by both red and blue.

While the design was brilliant, Topps had no idea they were creating the most challenging set of the 1970s...

Those red and blue borders are easy on the eye, yes, but they also easily show the slightest dings and wear.

As a result, finding cards in this set in mint condition is extremely tough.

Condition issues aside, though, it's a fantastic set loaded with Hall of Famers and key rookies.