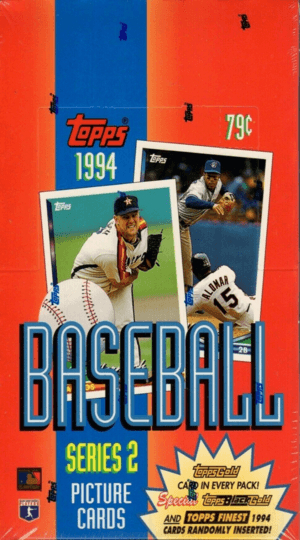 Had the 1994 MLB season not ended early in a strike, 1994 Topps baseball cards might receive a little more love than they do in this hobby.

The set design is pretty good and the checklist includes some fantastic players and Hall of Famers.

But, because of the strike, baseball fans and collectors turned sour on the sport, and this set suffered in popularity as a result.

However, with the recent boom in the sports card market, you might be surprised that some of these cards can still be worth something in high grade.

Like the 1994 Donruss, Fleer and Upper Deck sets, large print runs saturated the market with these cards, driving down their values.

On September 22, 1993, Nolan Ryan's arm finally gave out when he tore a ligament during a game against the Seattle Mariners.

It was a disappointing way to end his legendary career that spanned across four decades.

Topps paid tribute to Ryan by including him in their 1994 set and placing a small logo in the bottom-right corner that states "27 Major League Seasons".

His 27 seasons in Major League Baseball is the most by any player in modern baseball and one of the dozens of records he still holds to this day.

I have always appreciated how Topps chose to feature Ryan throwing a heater front and center on his final regular issue Topps card, just the way he should be. 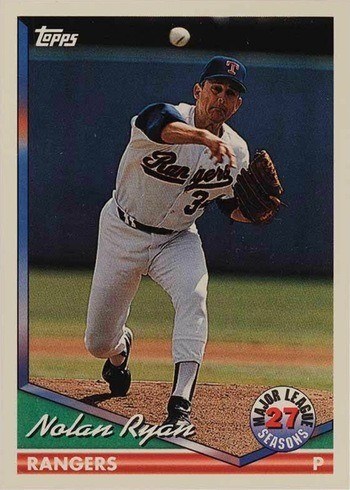 While Derek Jeter made his official rookie card debut in the 1993 Topps set, he appeared on this card alongside other short stop prospects Orlando Miller, Brandon Wilson, and Mike Neal.

Miller spent four years in the Big Leagues, but neither Wilson nor Neal ever made it past AAA.

And we all know how Jeter's career turned out: he's one of the all-time great New York Yankees.

In 1992, Jeter began working his way up from Class A Greensboro and a few years later made his Major League debut on May 29, 1995, after teammates Tony Fernandez and Pat Kelly were injured.

He was later demoted back to the Minors that year but returned as the Yankees starting shortstop on Opening Day of the 1996 season, a position he held until the end of his career in 2014. 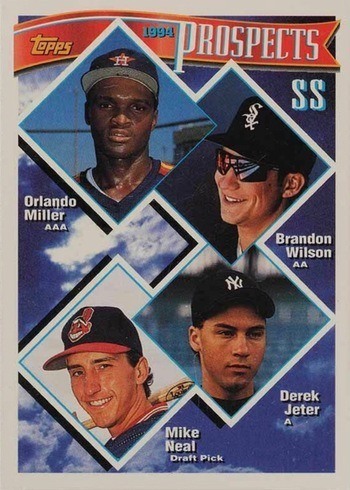 Drafted with the thirteenth pick in the first round of the 1994 MLB Draft, the Dodgers had finally landed Paul Konerko, a player they had been eyeing since he was barely a teenager.

After a stint in the Minors, Konerko played sparingly with the Dodgers in 1997 and 1998 but never lived up to expectations.

As a result, the Dodgers traded him to the Reds later in the 1998 season.

During the offseason that year, the Reds then dealt him to the Chicago White Sox, where he would spend the next sixteen years of his career as one of the league's most consistent power hitters.

Something clicked when he was with the White Sox as he was seemingly always good for 30 home runs and 100 RBI year after year.

After failing to reach enough votes to be elected to the Hall of Fame in 2020, Konerko fell off the ballot, but we'll see if he's eventually voted in later by the Today's Game Committee.

Technically, this card is part of the 1994 Topps Traded set but I tossed it in this list anyway. 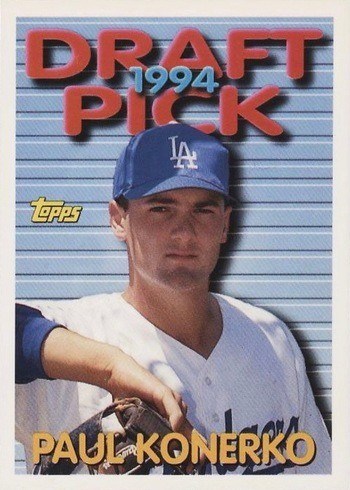 Ken Griffey Jr. got off to a blistering start to the 1994 season as he belted 30 home runs in the Mariners' first 65 games.

He hit just ten more during the remaining 47 games of the shortened season but still finished with the league lead at 40.

Griffey would lead the league in home runs three more times over his twenty-two years in the Majors.

He also finished with a career-best 1.076 OPS, picked up a Gold Glove and Silver Slugger, but finished a distant second in MVP voting to Frank Thomas.

This card has fantastic eye appeal, all driven by Griffey showing off his notoriously smooth swing and likely watching another blast head for the fence. 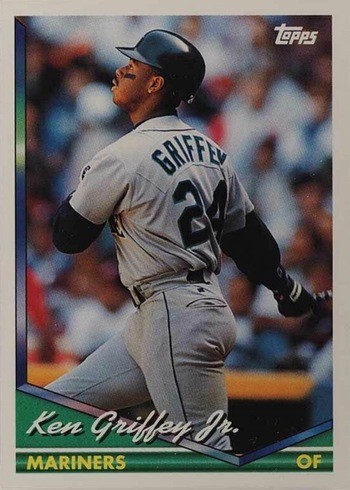 Late in the 1993 season, the Blue Jays traded Steve Karsay and José Herrera to the Athletics in exchange for Henderson as they were making a charge at a deep playoff run.

Due to a hand injury, Henderson could not perform up to his usual standards as he batted just .215, well off his career .279 average.

However, he did pick up his second World Series ring during his time with the Blue Jays as he and Paul Molitor scored on Joe Carter's legendary three-run walk-off home run versus the Phillies in Game 6.

During the offseason, Henderson re-signed with the Athletics and was back in the leadoff spot for the 1994 season.

He appeared in both the regular 1994 Topps set and the Topps Traded as a result of the trade. 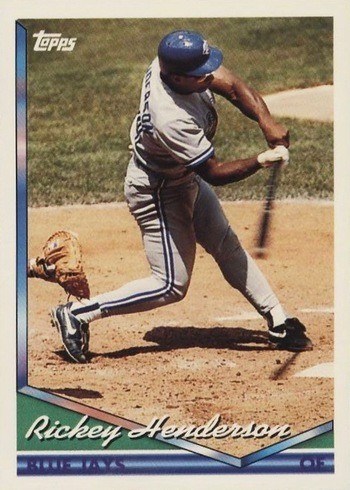 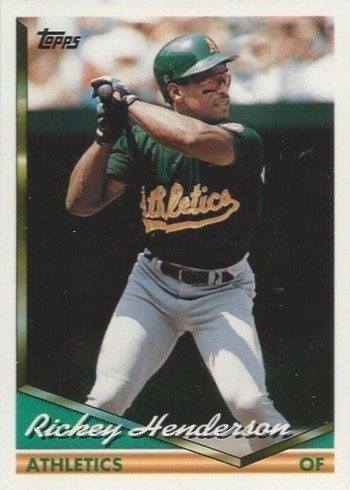 By the time the 1994 season rolled around, Don Mattingly was a shell of his former dominant self of the 1980s as injuries continued to nag him.

However, even though his power at the plate had greatly diminished, that didn't prevent him from being a staunch defender as he was able to pick up his 9th and final Gold Glove.

Mattingly would play one more year in 1995, helping the Yankees to the only playoff appearance of his career.

I remember vividly how huge his name was in the hobby during the late 80s and early 90s as he was always one of the big names you wanted to pull out of a pack of cards.

That hobby legacy helps keep his cards in decent demand from other collectors who grew up during that period. Because of a contract dispute with Jody Reed, the Dodgers found themselves in need of a second baseman heading into the 1994 season.

As a result, they sent a young Pedro Martinez to the Montreal Expos in exchange for Delino DeShields.

While he's shown as a Dodger on his regular Topps card, he and DeShields both appear in the Topps Traded set on an "Anatomy of a Trade Card" that breaks down bits of the deal on the reverse side.

It states that the Dodgers regarded Martinez as "unproven," which was true as Tommy Lasorda doubted that Pedro would even be as good as his older brother Ramon. 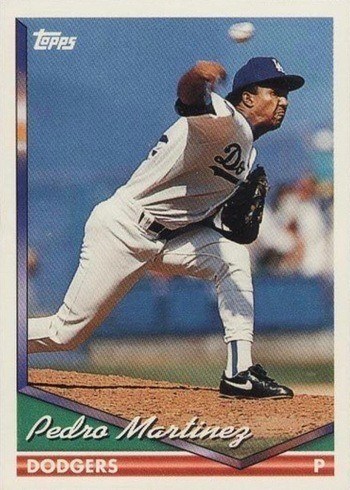 Foot injuries prevented McGwire from seeing much playing time in 1993 and 1994, and he would hit just nine home runs each season, as a result.

It's hard to say for sure, but it looks like Big Mac is watching one of those nine towering shots from the 1993 season head towards the outfield fence on this card.

Since the release of ESPN's Long Gone Summer documentary that detailed the home run duel between Sammy Sosa and McGwire during the 1998 season, McGwire's rookie cards have seen a resurgence in value.

The PED scandal will forever tarnish his legacy, but he was undoubtedly one of the most exciting players to watch during his era. 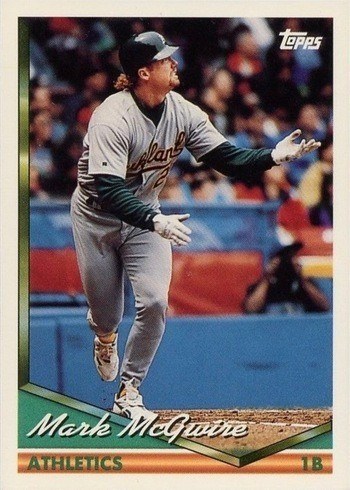 Cal Ripken Jr. has been one of my favorite players ever since I was a kid.

It's hard not to like a guy who was not only extraordinarily gifted but who gave his best effort every time he stepped on the field for 2,632 games in a row.

Ripken would pick up his eighth and final Silver Slugger award for his efforts during the 1994 season, and this card perfectly showcases his tremendous hitting ability. 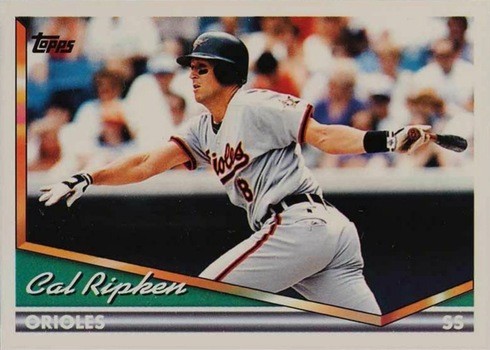 The 1993 Rookie of the Year, Mike Piazza burst onto the scene during his rookie campaign as he batted .318, hit 35 homers and drove in 112 runs to pick up a Silver Slugger.

He was an easy choice for the Topps All-Star Rookie Team in this set, noted by the golden cup in the lower right-hand side of the card.

Piazza was on pace to put up similar numbers in his sophomore campaign as he finished with a .319 batting average, 24 home runs, and 92 RBI in 107 games before the season ended prematurely.

Elected to Hall of Fame in 2016 as a New York Met, Piazza was one of the most exciting and popular players of his era. 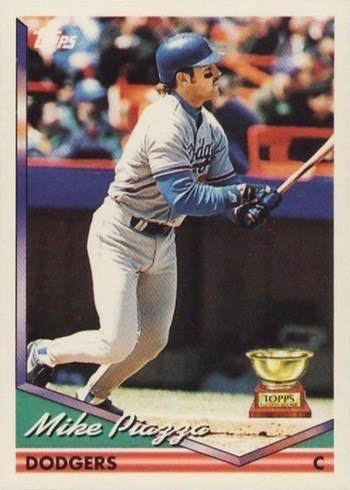 Distributed in two series of 396 cards each, the 1994 Topps set contained 792 cards in total with lots of stars and Hall of Famers but not many truly iconic cards.

As they had done in their previous two sets, Topps brought back the Gold parallel cards while also including Black Gold and Finest inserts to boost collector interest.

Within the set were also several subsets to enjoy, including:

However, combine the lack of key cards with the strike that ended the 1994 season and you are left with a set that is often overlooked by hobbyists.

Looking back now, though, it still brings back some great memories and nostalgia of the stars of that era.