During an era of massive market saturation, the 1992 Fleer baseball card set did whatever it could to win collector interest.

And those teal-colored borders…

While there’s no question the set is instantly recognizable, the checklist lacks any significant iconic cards.

Still, there are plenty of great memories of the superstars of the day packed within.

And, in this guide, I’ll go through the fifteen most valuable.

Like the 1992 Donruss, Topps and Upper Deck sets, large print runs saturated the market with these cards, driving down their values.

For the third year in a row, Ken Griffey Jr. would be named an All-Star and Gold Glove winner for the 1992 season.

With his hands cocked and weight shifted, The Kid's signature sweet swing is showcased perfectly on this card, making it one of the best-looking in the set.

Griffey finished 17th in MVP voting that year, his second-worst finish in the 1990s as there were a lot of guys putting up great numbers. Cards #708-713 in the set are known as the Pro Visions subset, a series of cards featuring artwork instead of photography on their fronts that highlighted some of the game's biggest stars.

Griffey's card shows the young superstar being showered by beaming, rainbow-colored light, with multiple celestial bodies in the background as he confidently hoists two bats over his shoulder.

I'm not sure what Fleer was going for here.

Maybe they were trying to say he was from another world or that he was the chosen one.

The reverse side mentions how great he already was at such a young age, backed by Nolan Ryan and Mariners hitting coach, George Cline, describing how skilled he was. 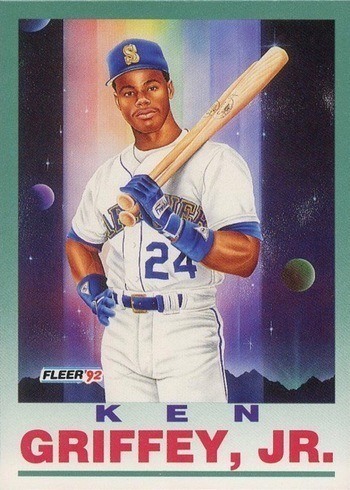 During Thome's first three years in the Majors, he hit just ten home runs in 369 at-bats, putting his AB/HR ratio around 36.9.

He would have finished right alongside Rickey Henderson at 734th on the all-time AB/HR leader board if he maintained that pace.

Instead, he finished fourth, with an AB/HR ratio of 13.76, as he drastically dialed in his power and swing mechanics over the remainder of his career.

All that practice and effort helped Thome become one of the greatest home run hitters of all-time as he currently sits in the number eight spot with 612 to his name.

His raw power is on full display on his 1992 Fleer rookie card as he takes a massive cut. Speaking of Nolan Ryan, the legendary hurler is next up on our list as he's shown unleashing some blazing heat.

Even at 45, Ryan still had fantastic pitching mechanics in terms of stride, arm-cocking, and acceleration that allowed him to light up the radar gun.

No, he probably wasn't able to throw as fast as 108 mph as he reportedly did during a game against the Detroit Tigers (in the ninth inning no less), but you get the point.

The 1992 season would mark his 26th season in MLB, which is amusing since Ryan once said he would've been happy to pitch just four years to qualify for his pension. 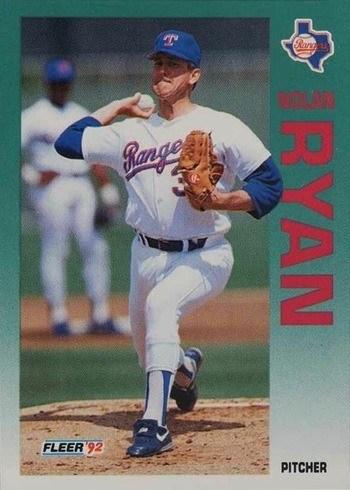 Unlike Griffey's Pro Visions card, it's crystal clear what Fleer was trying to say on this card: Nolan Ryan threw with incredible velocity and struck out hitter after hitter on his way to tallying a record 5,714 strikeouts.

The theme of the reverse of the card is "Who's Next," clearly referring to his incredible strikeout totals.

It also mentions how neither Griffey nor Frank Thomas was born yet in 1966 when Ryan first made his MLB debut, which is as amusing as it is impressive. Fleer also included a Record Setters subset that commemorated some of the most impressive achievements of the day.

One of those was Nolan Ryan's record seventh no-hitter.

On May 1, 1991, Ryan relentlessly dominated the Toronto Blue Jays, as he allowed no hits in a 3-0 victory while striking out sixteen hitters in the process.

The reverse of the card mentions how Ryan described feeling old and being in pain before the game.

Afterward, he described the game as the best of his career, stating, "I had the best command of all three pitches. This is the best. This is my most overpowering night." 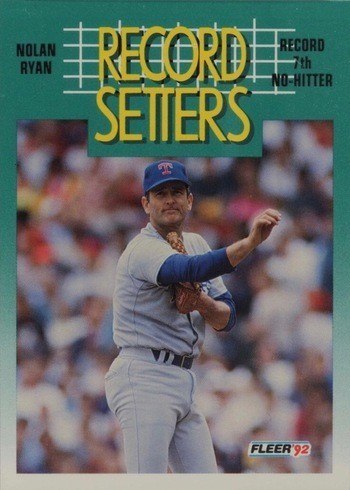 After leading the league in steals the previous two seasons, Rickey Henderson stole only 48 bases as a young Kenny Lofton far outpaced him for the American League lead with 66.

Any card that shows a player doing what he did best always makes for a great way to remember him, and this card is no exception.

With Henderson's compact stature and lightning-quick speed, you can easily see on this card how he was such a threat on the base paths. On the same day that Ryan notched his record seventh no-hitter, Rickey Henderson cemented his legacy as the game's all-time stolen base leader when he stole his 939th bag, surpassing Lou Brock for the lead.

"The Man of Steal" finished his career with 1,406 stolen bases, a record that will likely never be touched.

No one is even close.

Lou Brock is still in second place with 938, and since the game doesn't emphasize the stolen base like it used to previously, Henderson's record is likely "safe." 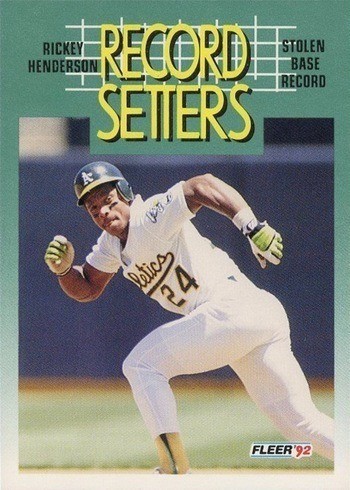 If you need a reminder of how gigantic, overpowering, and intimidating the 6'5" Frank Thomas must have seemed to opposing pitchers, then here you go.

Clearly, he had already made his mark on the game as one of the top players.

The following two seasons, he would erase any remaining doubt by notching back-to-back MVP campaigns.

I love everything about this card and have many fond memories of watching Thomas and the Sox on WGN. As big as he was, Thomas didn't necessarily possess the kind of power of guys like Cecil Fielder or Jose Canseco.

But, he did have the hitting ability of a guy like Kirby Puckett.

In some ways, he was like all of those three guys in one.

At least that's how Thomas's then-teammate, Tim Raines, described him on the reverse of Thomas's "Time Bomb" card in the Pro Visions subset.

To me, that comparison makes perfect sense.

Of all the cards in this subset, this one is probably my favorite as the artwork is fantastic, and the dynamite inside the barrel of one of the bats adds an excellent creative touch. Arguably the game's greatest shortstop to ever play, Cal Ripken Jr. cards were always among my favorites to collect.

Even though this one is far from his most valuable, it's still a great-looking card.

With a .366 slugging percentage, 14 home runs, and 72 RBI, his power and production may have dipped slightly, but his all-around skill shined as he picked up his second career Gold Glove.

Ripken brought so much skill and discipline to his game day in and day out, making him an absolute joy to watch. For decades, Lou Gehrig had held the record with 2,130, a number fittingly notched in the wall behind Ripken on this card.

According to the reverse side of the card, Ripken's streak stood at 1,572 consecutive games after the 1991 season, a year in which he picked up his second MVP award.

At the time, Ripken was still far away from breaking it, but he continued to grind and eventually snapped the streak when he suited up for his 2,131st consecutive game on September 6, 1995. His power wasn't what it used to be during the 1992 season, but Mattingly did turn his production up to a respectable 14 home runs, 89 runs scored, and 86 RBI while going on to pick up his seventh Gold Glove.

One of the biggest names in the hobby during the 80s and early 90s, Mattingly's cards remain popular among collectors who were kids during that era.

Once a seemingly surefire Hall of Famer, injuries eventually caught up to him and derailed the incredible trajectory he was on during the mid to late 80s.

Still, Mattingly is considered one of the all-time Yankee greats as the team retired his jersey in 1997. There was seemingly nothing Barry Bonds couldn't do during the 1992 season as his performance earned him a trip to the All-Star game, MVP honors, a Silver Slugger, and a Gold Glove.

The electrifying five-tool stud was already showing signs of going down in history as one of the all-time greats.

Unfortunately for Pirates fans, the team couldn't keep him on the roster after the 1992 season.

Instead, Bonds chose to sign with the Giants, where he would remain from 1993 until the end of his career.

While no one questions how talented he was, his legacy will remain forever tarnished by the PED scandal. One of the hottest names in sports during the late 80s and 90s, Jackson's legendary dual-sport stardom came to an end in 1991 when he injured his hip during a football game against the Bengals.

After the Royals released him, the Chicago White Sox signed him to a three-year contract in 1991.

He played sparingly during the 1991 season (when this photo was snapped) but could not play in 1992 due to recovering from hip surgery.

Jackson was such an incredible athlete and always a joy to watch whether he was playing football or baseball.

He remains a hobby icon with collectors who grew up watching him during his peak. While they certainly aren't the most valuable cards you'll come across, the 1992 Fleer baseball set brings back plenty of nostalgia.

The 720-card checklist is clearly lacking any iconic cards but it's packed with stars and Hall of Famers of the era.

Within the set were also several subsets to enjoy, including:

The set will likely remain overlooked in hobby history but to those who grew up collecting during that era, there will always be fond memories tied to it.