Of all his cards ever produced, the 1991 Fleer Michael Jordan basketball card remains a personal favorite of mine.

Just look at the overall eye appeal of this card and you'll see what I mean...

Those deep blue borders with the NBA logo embedded in them were a creative step forward at the time.

And the image of Jordan ripping down a rebound with teammate Horace Grant looking on injects the card with excitement.

Typically I prefer a Jordan card with a shot of him dunking but this one gets a pass...

The 1991 Fleer set itself may not be worth much these days because of the massive print volumes but you may be surprised at how much the Jordan card can be worth.

In this guide, I cover everything you need to know about this explosive card.

The value depends on two things:

To be in pristine, gem mint condition it has to be in almost flawless, pack-fresh condition with excellent centering, sharp corners, and no surface damage.

Professional grading companies like BGS and PSA are stringent and review cards under magnification to look for flaws.

But, if they determine your card is in top shape, the price of the card will significantly increase.

Here's a look at prices from both companies in different grades:

When it comes to modern cards, collectors typically prefer BGS.

And they'll place a huge premium on any card that achieves the lofty BGS 10 Pristine grade since it is so tough to achieve.

It's also loaded with Hall of Famers like Magic Johnson, Larry Bird, Charles Barkley, Patrick Ewing and many more.

But Jordan's card is by far the most desirable. 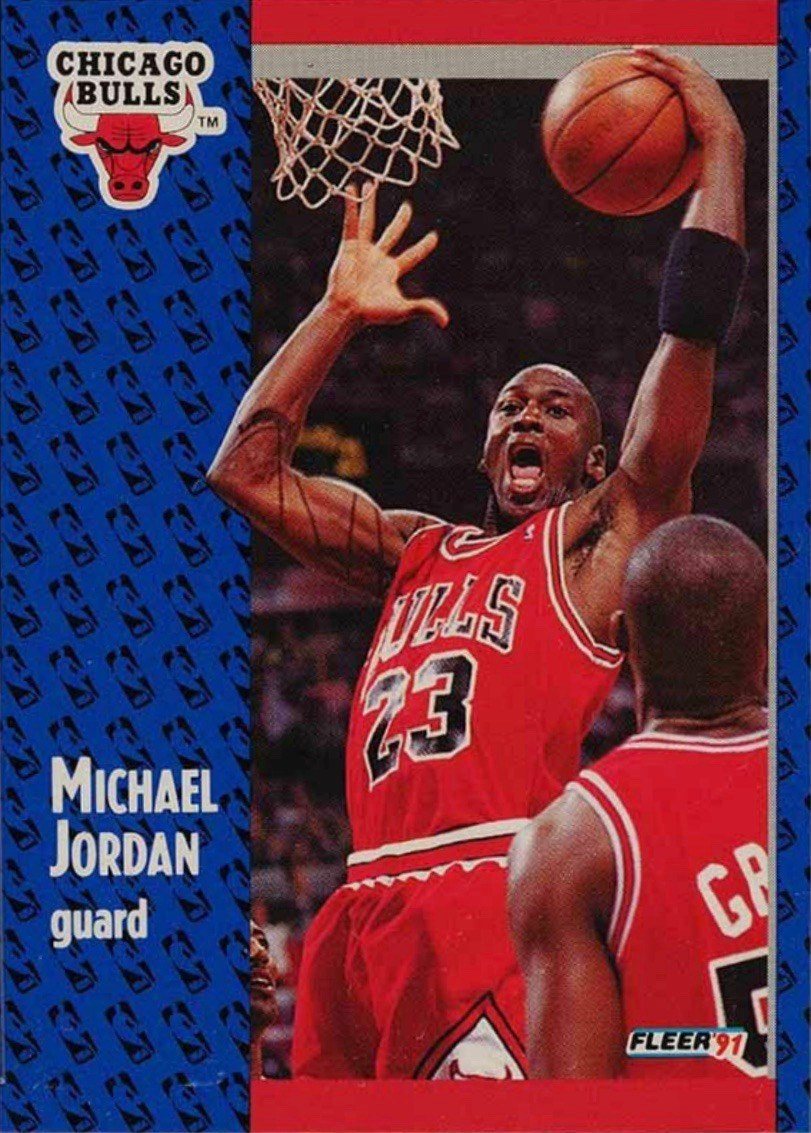 Design: The design of the card is instantly recognizable with deep blue borders and bright image of Jordan that dominates the right-hand side of the card.

The image on his 1990 Fleer card was arguably better but it's hard to complain about any Jordan card...

Those blue borders really pop but they can be a condition obstacle since they easily show wear and tear.

I always loved how Fleer embedded the NBA logo repeatedly in the background of the borders as an interesting design touch.

Jordan's name and position are placed in the lower-left of the card while the Chicago Bulls logo sits in the upper-left.

The Fleer brand and year of the set round out the card in the lower-right corner.

Reverse Side: The reverse side of the card is printed with a vertical layout and features his personal information and stats from previous years.

Fleer sets of all kinds during the 80s and early 90s had a distinct look and feel to them, but this design started to look a bit different and more advanced.

For starters, it contained both a headshot and action shot of Jordan

And the hardwood background was a change-up from the typical bland backgrounds they were known for using.

The write-up at the bottom provided a glimpse at how dominant he was at that point in his career.

Sometimes people forget just how great of a defender Jordan was since he was basically a human highlight reel on offense.

Little did Fleer and everyone know but Jordan was about to capture his first NBA title that season... 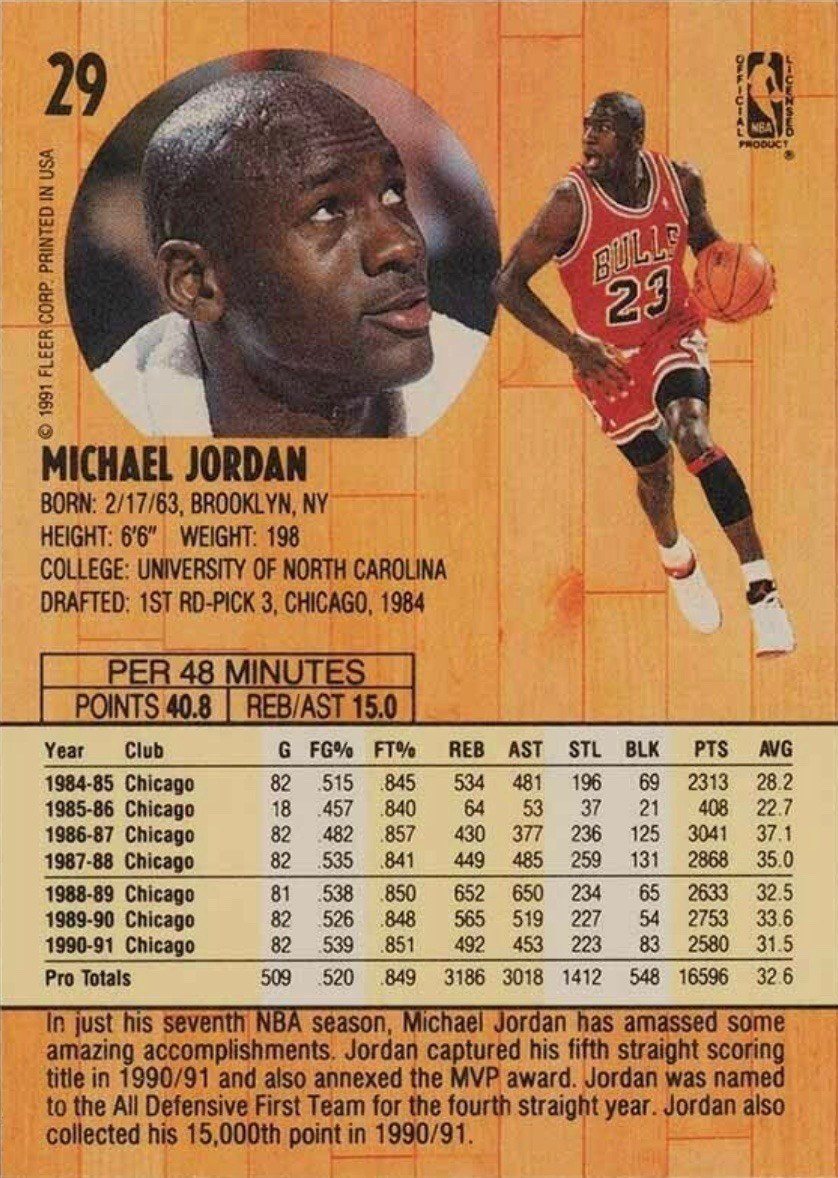 Condition Issues: Centering can be tough but like I mentioned a bit earlier, the blue borders are susceptible to showing wear and tear.

Most everyone agrees that Michael Jordan was the greatest ever to play the game of basketball.

And what a treat it was to watch him during his prime.

Not only did he elevate the game of basketball to new heights but he positively impacted sports and society in general.

His champion mentality and dedication to his craft transcended the game of basketball and set an example for kids everywhere.

Those are just some of the amazing accomplishments that he'd put up over his legendary career as the list is quite huge.

The only question mark left on Jordan's resume is just how much more he could have achieved had he not retired twice before finally calling it quits after his stint with the Wizards.

Jordan cards will always be some of the most desirable in the hobby and even though many others are more expensive than this one, it will always have a huge nostalgic factor to it.