To this day, I still remember walking into my local card shop as a kid to add a 1989 Fleer Michael Jordan basketball card to my collection.

I can't remember how much I paid, but I slid some birthday money across the glass counter, and it was mine...

Over the years, I collected several different Jordan cards (as any kid did back then), but the '89 Fleer base and sticker cards remain some of my favorites.

And in this guide, I cover everything you need to know about both of them.

The first thing that's usually on collectors' minds is: how much are 1989 Fleer Michael Jordan cards worth?

Although they were heavily-printed and not hard to find these days, they can be quite valuable in high-grade condition thanks to the recent explosion in the popularity of cards of that era.

Below are some estimated prices of each of his '89 Fleer cards in a range of conditions from near-mint/mint (PSA 8) to gem mint (PSA 10) as determined by third-party grading company Professional Sports Authenticators (PSA).

Keep in mind that when you are talking PSA 10, the card is flawless with fantastic centering and no damage to the corners, edges, or surfaces.

Distinction: In a set loaded with Hall of Famers like Magic Johnson, Scottie Pippen, and Larry Bird but lacking in any blockbuster rookies, Michael Jordan's card stands far above the rest as the key card.

It may not be his most expensive card you can find but it's a classic that every Jordan collector should have.

Design: The cards in this set feature an exciting design element that I've always enjoyed: if there were something notable about a player, the lower-left corner would flip up to reveal that info.

I used to love skimming through the set to see those notes on who was leading what category or who was traded to another team.

Since Jordan was a scoring machine and led the league in scoring during the 1988-89 season with an average of 32.5 points per game, Fleer called that out in the lower-left.

Jordan's name, position and the Chicago Bulls logo are all placed across the top to make room for the central image of Jordan soaring through the air.

From the rich, red borders that perfectly complement the Bulls color scheme to the action-packed image, this card has so much to offer in terms of eye appeal.

Reverse Side: The reverse side of the card is printed with a horizontal layout and features his personal information and stats from previous years.

The write-up at the bottom mentions that Jordan was the all-time scoring average leader with 32.6 points per game at the time.

While he eventually ended his career tied first with Wilt Chamberlain with a per-game average of 30.1 points, you have to believe Jordan would be alone on top had he not retired during some of his prime years.

Overall, the reverse design is nicely-structured to present his stats, personal information, and trivia bits in a simple and easy-to-read format. Condition Issues: Centering is usually the biggest obstacle for collectors with this card while the red border sections on the back can easily show wear and tear.

Distinction: Eleven of the era's biggest stars could also be found in the form of a 1989 Fleer All-Star sticker card.

Of the eleven, Dale Ellis and Tom Chambers were the only players who did not eventually become Hall of Famers.

Jordan is again the key to the set. Design: Sticker cards had been a thing of Fleer's ever since they began producing cards again with their iconic 1986-87 set.

A fantastic image of Jordan going up for the score against the rival New York Knicks sits nicely between an upper and lower border scattered with stars.

Reverse Side: The fantastic write-up is the center of attention on the reverse side of the card.

In it, Fleer discusses how much excitement Jordan generated, how good he was on both offense and defense, and my favorite part: they mention how people were already debating if Jordan was the greatest ever.

The "Bend & Peel" notation in the lower-right intended to help guide collectors peel the stickers to place them on some other surface, but those who did so back then certainly regret it today.

As a kid, I remember it took an iron will not to peel off these stickers. 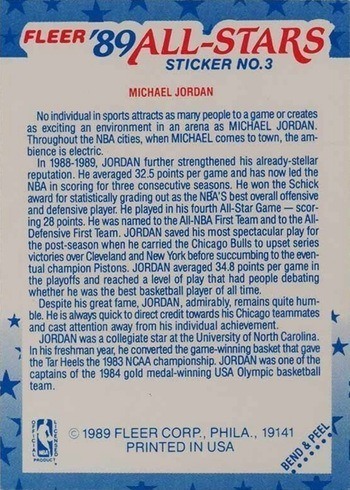 Condition Issues: Centering is a significant issue for these stickers.

That, combined with the fact that many kids peeled them off years ago, makes it challenging to find these in top condition, hence the hefty price tag in a PSA 10 holder.

Michael Jordan was the greatest basketball player of all-time, and his larger-than-life legacy is as strong today as it ever was.

Those are just some of the extraordinary accomplishments on an extensive list of achievements.

Who knows what else he may have accomplished had he not retired multiple times during his NBA career.

Jordan cards will always be some of the most desirable in the hobby.