For as many high-quality rookie cards and Hall of Famers as it contains, the 1988 Fleer basketball card set seemed to fly under the radar for many years.

The release of The Last Dance on ESPN and the recent explosion in the sports card market overall has changed things drastically.

Prices of these cards have soared to heights that were unthinkable a year ago.

Who knows if they’ll remain this high?

Regardless, going through this checklist brings back so many good memories of watching these guys play in the late 80s and throughout the 90s.

And in this guide, we look at the 12 most valuable the set has to offer.

Like the 1990 Hoops and Skybox sets, there were just so many of these cards printed.

During the spring and summer of 2019, you could expect to pay around $500 for Scottie Pippen's rookie card in PSA 10 condition.

Now they're nowhere near that "cheap."

Ever since The Last Dance aired on ESPN, this card and many other basketball cards of that era have skyrocketed in value.

Had the Chicago Bulls not traded Olden Polynice to the Seattle SuperSonics in exchange for Pippen during the 1987 NBA Draft, who knows how his career may have turned out?

But, as fate would have it, the trade came to pass, and Scottie Pippen teamed up with Michael Jordan to lead one of the most dominant runs in NBA history throughout the 1990s. 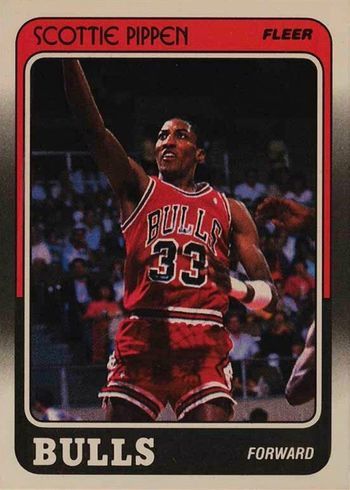 Usually, Michael Jordan will be the most valuable card in any set from the 80s and 90s in which he appeared, but in this case, he narrowly misses out to the Pippen rookie.

On his third-year card, Jordan is shown getting tangled up against the Atlanta Hawks' Kevin Willis during the middle of what looks like a jumper or maybe a pass down low to a teammate.

Heading into his fifth season in the NBA, Michael Jordan was already a four-time All-Star and was coming off of back-to-back scoring titles.

Not surprisingly, he would lead the league in scoring again for the 1988-89 season with an average of 32.5 points per game.

It was already crystal clear by then that Jordan would end up as one of the game's all-time superstars. 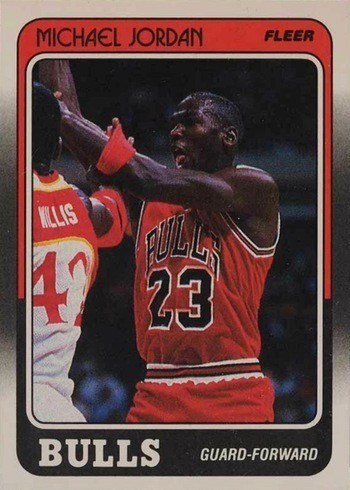 I remember being around 7 or 8 years old and picking up this card from the local card shop with some birthday money that I had saved.

The image of Jordan soaring through the air was more exciting than the one on his base card, so I decided on this instead.

I can't remember how much I paid back then, but I probably had $10-15 that grandparents, aunts, and uncles had given me, and I spread that out to buy multiple cards on that buying trip.

The other day, I pulled it out from my box of old cards for a bit of nostalgia, and after reviewing its damage and centering, I'd say it's probably a PSA 3 or PSA 4 at best.

So, I haven't made enormous gains on it, but I'd never sell it anyway due to the sentimental value tied to it.

But, had I known these cards would be worth this amount today, I'd probably have tried to buy a few more somehow and take better care of them.

We all would, right? 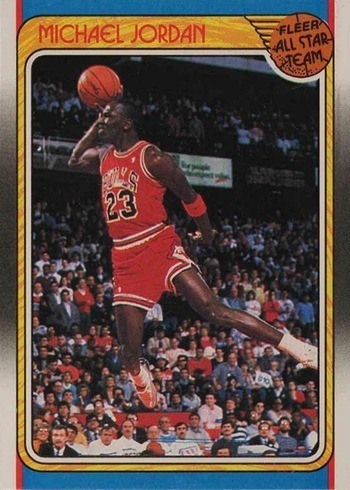 Growing up in Indiana, I remember how much everyone loved the Pacers and especially Reggie Miller.

Kids on the playground tried to imitate his unorthodox shooting style as they tried to bury long-range jumpers just like he did game after game at Market Square Arena.

Miller's rookie was worth around $500 or so a year ago in PSA 10 condition and is now more than double that.

Clearly, Pippen's card has seen a much more favorable boost in value from The Last Dance.

But it makes sense because the documentary focused on the Chicago Bulls and not the Pacers.

This card brings back so many memories of Miller and those Pacers teams of the 1990s who were always right there in the mix battling against the Knicks and Bulls for the Eastern crown. 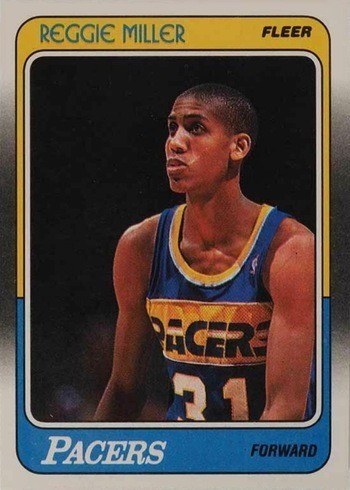 How did a guy who stood 6'7" lead the NBA in rebounding for seven straight seasons during the 1990s?

You'd think the title would have changed hands between guys like Shaq, Mutombo, Olajuwon, Robinson, and Ewing.

But, no, Dennis Rodman out-rebounded them all, and sometimes his per-game averages were three and four rebounds ahead of the next guy.

He possessed an uncanny ability to sense how every shot would bounce off the rim and how to position himself to be in the exact time and location to grab it.

Having Rodman on your team meant more second chances at shot attempts on offense while preventing the opposing team from such a luxury.

He wasn't a flashy scorer, so he didn't show up in the spotlight and highlight reels as much as his teammates.

But he was a critical asset to the several teams on which he played and is arguably one of the most underrated players of all-time.

And, the price of his rookie card reflects it, in my opinion. 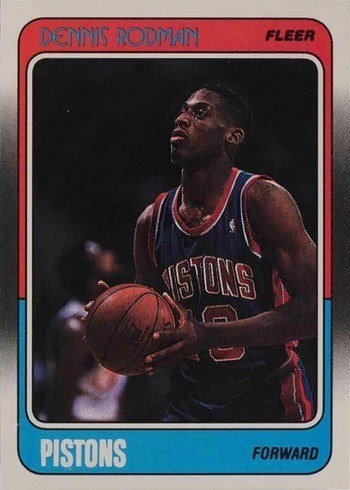 Speaking of underrated players, you can probably throw John Stockton into that discussion as well.

Stockton was a solid scorer but will always be remembered for being the game's all-time leader in both steals and assists.

Yet, he seems to fly under the radar when it comes to discussing the best point guards in history.

Some will say he was the best, but some won't even put him in their top five.

He wasn't flashy, that's for sure.

But, he could control the floor on offense and was a tenacious defender.

His rookie card, though, appears to have increased more than others on this list on a percentage basis as you could find them in PSA 10 holders for $120 - $150 a year ago. 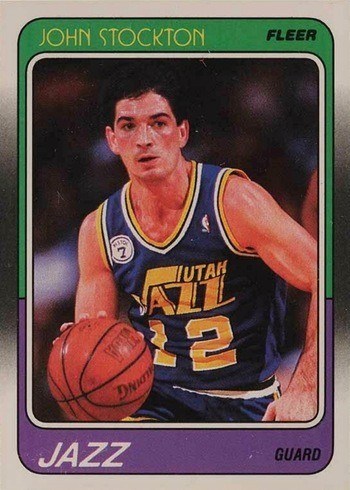 Clyde Drexler's card is the toughest in the set to find in PSA 10 condition as just 32 examples have achieved that grade at the time of this writing.

Were it not such a difficult card, Drexler likely wouldn't be this far up on the list.

It's not his rookie card.

And, he's not as popular as guys like Olajuwon, Magic, and Bird, who appear lower on this list and Charles Barkley, who doesn't even appear at all.

Don't get me wrong, Drexler was an absolute stud and one of the greatest players in the game's history.

But, the steep price tag on this card is much more related to how difficult it is to find in a PSA 10 holder. 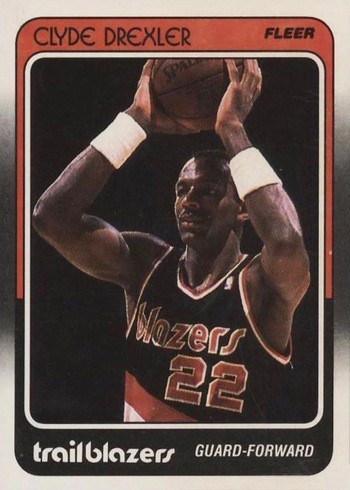 As we saw earlier, Jordan's is by far the most valuable in the subset, while Stockton's comes in second.

Guys like Magic Johnson, Larry Bird, and Charles Barkley also appear in the All-Star subset but Stockton likely gets such a boost over them because this is somewhat of a "rookie" card. While Jordan was named league MVP the previous year, it was Magic Johnson and the Lakers crowned as champions of the 1987-88 season.

And, heading into the 1988-89 season, hopes could not have been any higher in Los Angeles as the team was looking to three-peat as NBA champions.

However, after sweeping the Phoenix Suns to win the Western Conference, the Lakers ran into a wall in the NBA Finals as the Detroit Pistons swept them.

We all know Magic would have much rather won the championship, but for his efforts that season, he did earn his second of three career MVP awards. 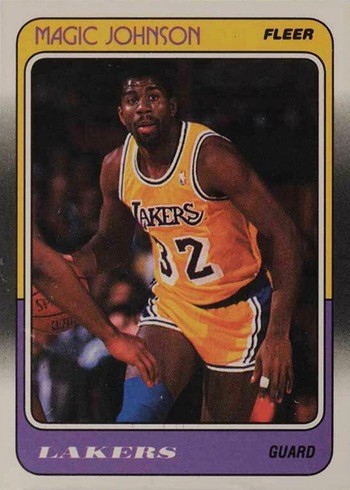 An integral part of the Chicago Bulls' first three NBA titles during the 1990s, Horace Grant originally joined the team as the 10th pick of the 1987 NBA Draft.

For the next seven seasons, Grant played a vital role for the Bulls as a solid rebounder and fierce defender.

With Michael Jordan absent for the 1993-94 season, Grant stepped up to establish personal bests in points per game (15.2), rebounds per game (11) and assists per game (3.4) to earn the only All-Star selection of his career.

He would depart Chicago the following season and opted to sign with the Orlando Magic, where he, Shaq, and Penny Hardaway would make a trip to the 1995 NBA Finals.

Not quite a Hall of Famer, Grant will be best remembered for his time in Chicago, which is the main reason behind his rookie card's value. The 1988-89 season was a bit of a bummer for Bird as his season ended after just six games because of surgery needed to remove bone spurs from his heels.

It was the only season of his 13-year career in which he did not make the All-Star team.

Despite that, his overall body of work as one of the greatest players in NBA history help keep this card (and his others) high on collectors' want lists.

I love how James Worthy is also shown on this card as he and the Lakers were such strong adversaries of the Boston Celtics during the 1980s. When Hakeem Olajuwon first arrived at the University of Houston, they originally listed his name as "Akeem," for some reason.

It stayed that way until 1991 when he officially changed it to "Hakeem" to reflect the proper Arabic spelling.

Regardless of how his name was listed, Olajuwon was one of the most dominant centers ever to play the game.

His signature "Dream Shake" left defenders looking helpless and silly while he was an incredible defender on the opposite end.

Olajuwon put up 24.8 points per game during the 1988-89 season and picked up his first two career rebounding titles with 13.5 rebounds per game.

I loved watching him play, and who knows if we'll ever see another big man who was as smooth and agile as Olajuwon? When you look back on this set, it was clearly one of the best basketball card sets of the 1980s.

It's loaded with Hall of Famers and contains many fantastic rookie cards of some of the best players in NBA history.

The design has always been one of my favorites, as well, as it's simple yet powerful in eye appeal.

Will the values of some of these cards remain at these levels, or will they eventually trend downward?

Only time will tell.

In the meantime, it's so nice to see it getting the attention it deserves.