For all the mass production that occurred in the baseball card hobby in the late 1980s, I’ve always felt that the 1988 Fleer baseball cards still stood out…

The images were average but the red, white and blue design elements gave them a patriotic feel that made them pop.

Rookie cards of Edgar Martinez and Tom Glavine headline the checklist while many of the big name stars of the day are included as well.

In this guide, I will cover the 10 most valuable cards in the set that can still be worth a decent amount if certain conditions are met.

Brief disclaimer: most of the cards in this set will generally not be worth anything...

Much like their 1988 Donruss, Score and Topps counterparts, so many of them were produced that it has destroyed their value.

The only way they can have much value today is by being graded by PSA to be in perfect, gem mint condition (PSA 10) and/or be from the premium "Glossy" parallel set.

To me, one of the most interesting things about Edgar Martinez is not that he was elected to the Hall of Fame as a designated hitter.

In fact, the DH tag doesn't bother me one bit.

What surprises me most is how long it took for his career to really take off...

Martinez made his Minor League debut in 1983 at the age of 20 but it wasn't until seven years later that he logged his first full season in the Majors.

His natural position was at third base and the Mariners for years were simply committed to other third basemen (namely Jim Presley) ahead of him until he finally got his shot in 1990.

However, Martinez will mostly be remembered for his work as a full-time DH that began during the 1995 season and tormented opposing pitchers for years to come. During the 1990's, the Atlanta Braves had one of the most dominant starting rotations the game has ever seen.

And Tom Glavine was a big reason for that...

What he may have lacked in power, he more than made up for with intelligence and pinpoint control.

That consistency and discipline helped Glavine to win a total of 305 games placing him behind only Warren Spahn, Steve Carlton and Eddie Plank for most wins by a left-handed pitcher. Mark Grace may not be a Hall of Famer like the first two guys on this list but that doesn't keep his rookie card from being much cheaper.

Kids who grew up collecting during the 1980s and 1990s remember how popular this guy and his rookie cards were.

The fact that he was a star for the Chicago Cubs, who have one of baseball's most loyal fan following, certainly played into that.

Grace was a four-time Gold Glover at first base and could always be counted on for production at the plate.

Those kids who grew up watching him are now adults who still look for his rookie cards in high grade, which is why this one is worth around $20 in a PSA 10 holder. Another legend whose name you'll routinely find at the top of any set in which he appeared, Nolan Ryan would spend his last year with the Astros in 1988.

Even at the age of 41, he led the National League in strikeouts with 228 and went on to win 12 games that season.

Fleer could've boosted this card's appeal if they'd pictured Ryan throwing one of his blazing fastballs but apparently he was barely ready for a picture at all as he's got his cleats tucked under his left arm.

Regardless, that retro Astros jersey and look on Ryan's face help give this card some great pop. Baltimore Oriole legend, Cal Ripken Jr., will usually be found among the key cards of any set in which he appeared.

Arguably the greatest shortstop to ever play the game, Ripken will not only be remembered for his amazing playing abilities but for how long and consistently he was able to play.

In fact, his record for most consecutive games played of 2,632 is likely one of the records in all of sports that will never be surpassed again.

Many of the cards on this list and in this set were simple player poses so what I most enjoy about this particular card is the fantastic action shot of Ripken watching one fly off his bat. Bo Jackson's status as one of the most popular athletes in the world was at meteoric heights during the late 1980s and early 1990s.

The two-sport stud was all over the place thanks to Nike's "Bo Knows" campaign and his legendary dominance in Nintendo's "Tecmo Bowl".

The fact that Jackson was able to play professional football and baseball at the same time was incredible enough.

The fact that he was both an NFL Pro Bowler and MLB All-Star, though, is just mind-blowing.

Kids who grew up idolizing him then are now adults who are always on the hunt for his cards in PSA 10 condition. McGwire's 1987 season was one of the best rookie seasons in the history of the game as he belted a then-rookie-record of 49 home runs.

That ability to hit the long ball made him a larger-than-life superstar.

From then on, McGwire was always one of the names kids were wanting to pull from packs.

We all know how his legacy will forever be tarnished by the PED scandal but there are collectors out there who still look for his cards in high grade. Like McGwire, Bonds' career ended in controversy as he, too, was caught up in the PED scandal that rocked the sport for several years.

However, he's still regarded as one of the most talented and skilled players who ever stepped onto the field.

His ability to hit, run, and field were off the charts even before he began using PEDs.

Like many of his early cards, Bonds is pictured here with a bright, beaming smile on his face looking primed to take over the league. 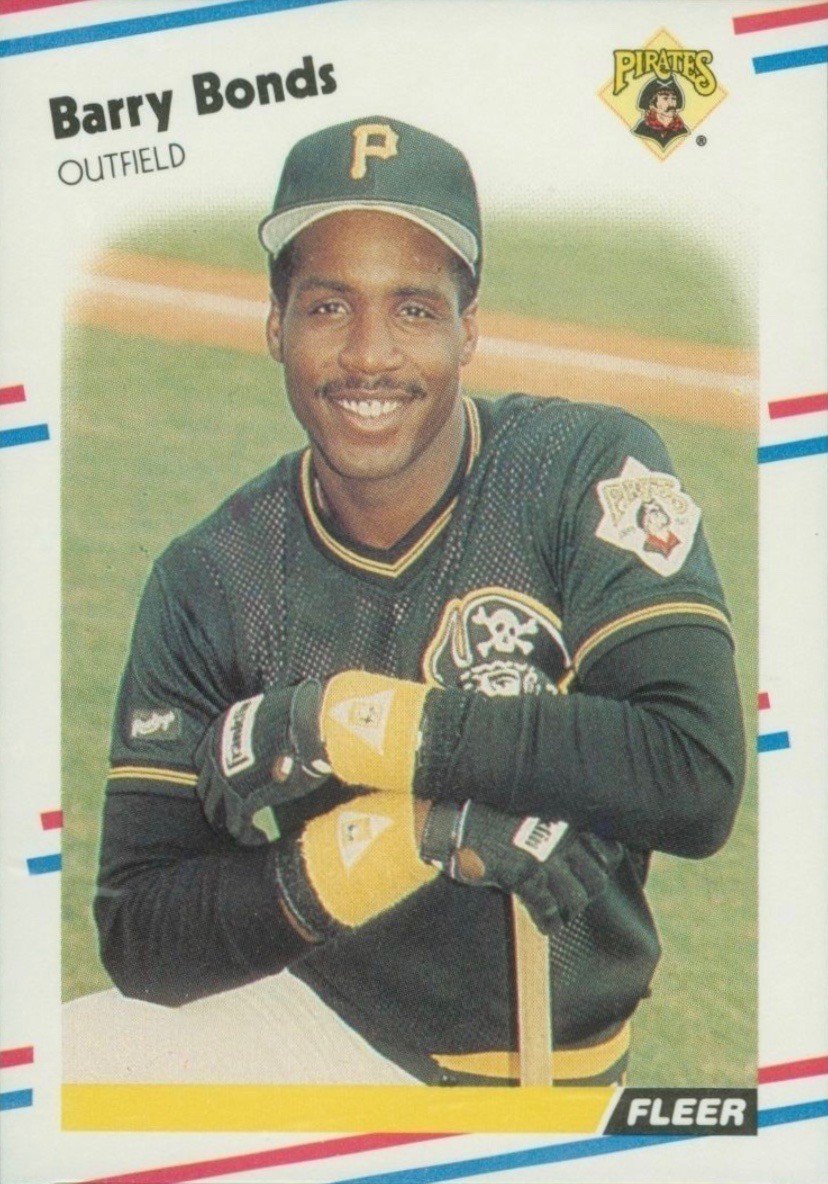 One of the most incredible things about Rickey Henderson's 1988 season was not that he led the Majors with 93 stolen bases.

It's that 93 stolen bases was just his fourth-highest total for a single season...

He'd already topped the 100 stolen base mark three times during his early years with Oakland.

This is one of my favorite cards in the set as Rickey looks intensely-focused on stealing another bag. 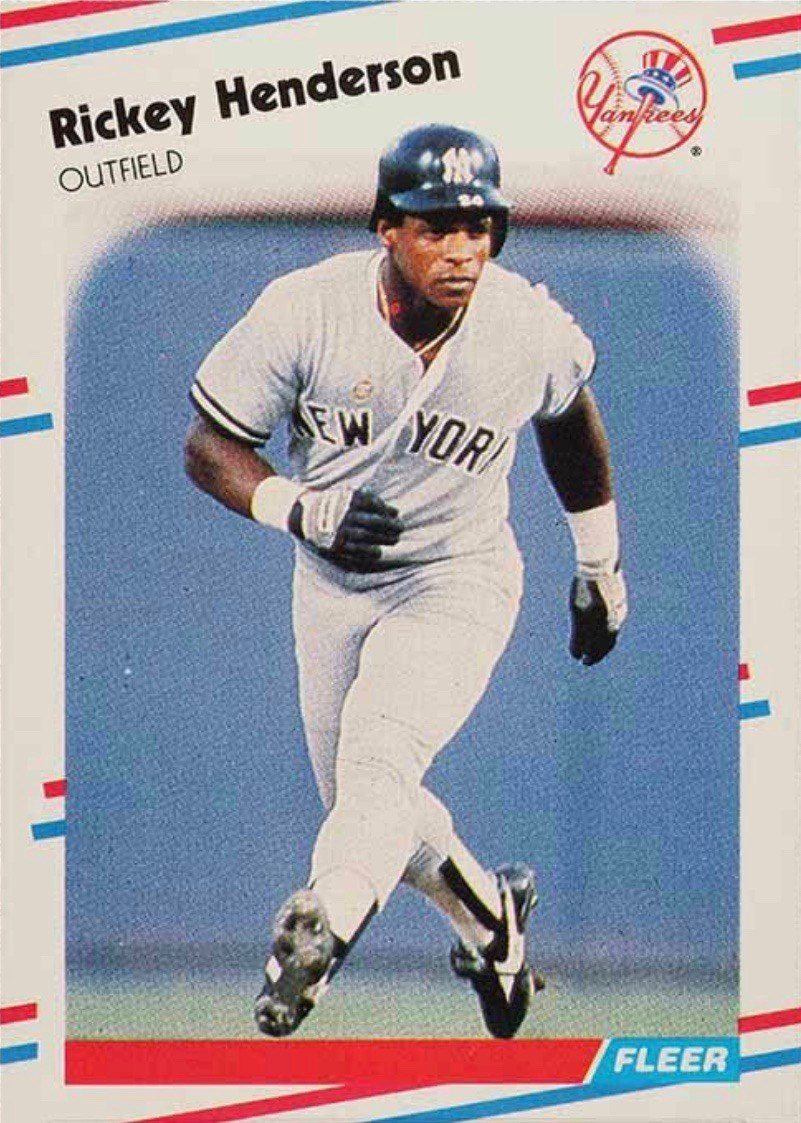 While it may not be worth what it once was, this is a fantastic card that pictures one of the most iconic duos of the 1980s.

The "Bash Brothers" did nothing but send balls flying over the outfield wall during their prime time together and that's one of the reasons the A's would end up in the World Series that year.

That, and the fact that Canseco put up an MVP season and would enter the "40/40" club after belting 42 home runs and stealing 40 bases. While they may not have much value today, the 1988 Fleer set definitely packed a lot of star power.

And the design was truly unique..

Within the 660-card set, there were also several different subsets at the back-end, including:

Add in a couple of Hall of Fame rookie cards in Martinez and Glavine and it really is a pretty decent set overall if for nothing else than nostalgia.