Some sets in this hobby are instantly recognizable and the 1987 Donruss baseball card set is certainly one of them.

How can we forget those black borders and those little baseball-laden stripes that flank the player images?

The set is notable for its long line-up of rookie cards in Greg Maddux, Bo Jackson, Barry Bonds, Mark McGwire, Barry Larkin, and Rafael Palmeiro, among others.

But the set design is unforgettable…

While many of the cards in this set sadly no longer have any value, you might be surprised by what some of these cards are selling for these days.

Like the 1987 Fleer and Topps sets, far too many of them were printed and the market is over-saturated with them.

You wouldn't have thought Maddux end up as one of the greatest pitchers of all-time by his performance in the 1987 season.

And the rest is history.

It's amazing how masterful Maddux was all those years, especially that stretch of four consecutive Cy Young seasons from 1992-1995.

The guy practically owned the 1990s and early 2000s during an era when many opposing hitters were jacked up on PEDs.

Selling right around $100 these days, Maddux's rookie card is the key to the set. 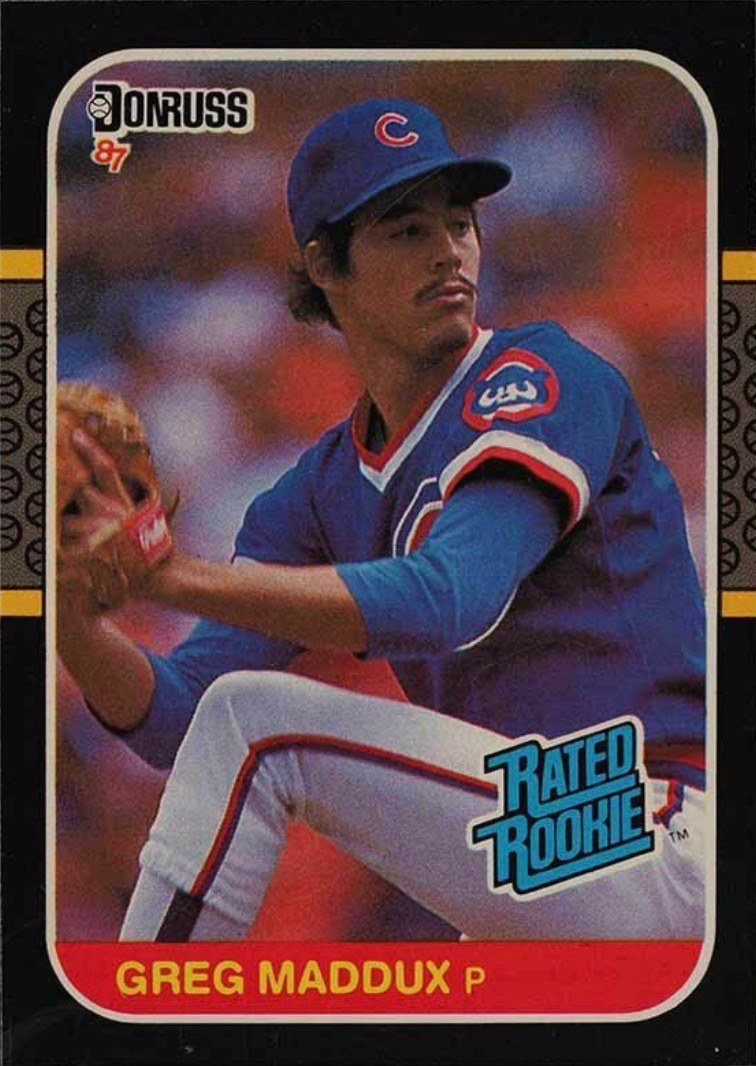 Because of his iconic status as a two-sport superstar during the late 1980s and early 1990s, Bo Jackson is one of the hottest names in the hobby from the "junk era".

Kids who grew up collecting during that time were inundated with Bo Jackson hype in the form of everything from Nike ad campaigns to his legendary dominance on Nintendo's Tecmo Bowl.

Had that fateful hip injury not have derailed his career, he may have ended up as a two-sport Hall of Famer.

What is certain, though, is that his rookie card in this set can be worth over $50 in high grade. Although his reputation hangs under a cloud of controversy due to his ties with the PED scandal that rocked the sport late in his career, the value of Bonds' rookie card has held up well over time.

Despite that controversy, though, he remains quite popular with baseball fans and collectors who watched him transform into one of the most skilled players in history even before PEDs were introduced into the equation.

If he ever makes it into the halls of Cooperstown, this card will surely skyrocket to the top of the list. Unless an error is caught and corrected in this hobby, it usually won't impact the value of a card that much and winds up being nothing more than an interesting side note.

Well, Donruss did catch the error on this card and eventually corrected it making the uncorrected version worth something.

A staple of Donruss sets for years, the Diamond Kings cards in this set featured a yellow stripe over the "Donruss Diamond Kings" phrase on the cards' reverse sides.

However, Davis' card can be found without that yellow stripe making the error version worth much more. Mark McGwire burst onto the baseball scene in 1987 when he cracked a league-leading 49 home runs which were also the most ever by a rookie at the time.

For years, Big Mac was one of the most feared big bats in the league as he was always in the chase to lead the league in home runs when healthy.

However, like Bonds, his ties to PEDs have been well-documented and we'll never know for sure how much of that otherworldly power was attributable to drugs.

This hobby still remembers McGwire and how the former "Bash Brother" was smashing homers even in his early days, which is why his rookie card sits comfortably in the middle of this list. Over his 19-year career, Larkin would appear in 12 All-Star games, win 9 Silver Slugger awards, 3 Gold Gloves and was named the MVP of the 1995 season.

He also helped lead the Reds to that stunning sweep in the 1990 World Series over the Oakland Athletics, who everyone thought at the time was transforming into a baseball dynasty.

Larkin was one of the greatest players of his era and for his efforts, he was inducted to the Baseball Hall of Fame in 2012.

Prior to that induction, Larkin might not have appeared on this list so that shows you what being a Hall of Famer can do to a card's value.

Kirby Puckett was consistently one of the best players on both sides of the ball throughout his career as he picked up 6 Gold Gloves and 6 Silver Sluggers when all was said and done.

The 2-time World Series champion and 10-time All-Star remains popular in the hobby as you'll see his name among the key cards to own in any set of his era.

Although Palmeiro made his rookie debut as a member of the Cubs in 1987, it would take him several years and a trade to the Texas Rangers before he transformed into one of the best hitters in the game.

But, as we'd later learn, he too would be tied to the PED scandal and his reputation would forever suffer as a result.

His rookie card can still be worth around $20 in top condition. Of all the seasons that Nolan Ryan pitched in his storied career, the 1987 season sticks out as one of his most interesting.

No, he didn't through any no-hitters that year.

It's interesting because of how great he was yet how terrible his record was.

Houston had a terrible bullpen that year and the bats provided him with next to no run support.

Even though this photo was taken before the start of the season, it's almost as if Ryan has a "Are you kidding me?" expression on his face. Heading into the 1987 season, Don Mattingly already had a batting title, MVP, 2 Gold Gloves and 2 Silver Sluggers to his name.

The guy was on fire and was looking like the next great Yankee Hall of Famer.

However, injuries would plague Donnie Baseball and although he was still great with the glove, his power would nosedive in the 1990s.

Despite the unfortunate turn of events, Mattingly remains a beloved figure of the era and still has quite the collector following in this hobby. So there you have it, the ten most valuable 1987 Donruss baseball cards.

While lacking in subsets, the 660-card checklist does contain a run of 27 Diamond Kings created by hobby icon, Dick Perez, and some big name rookie cards.

If you're looking for a cheap set with lots of stars and Hall of Famers that's packed with nostalgia, then this one's for you.