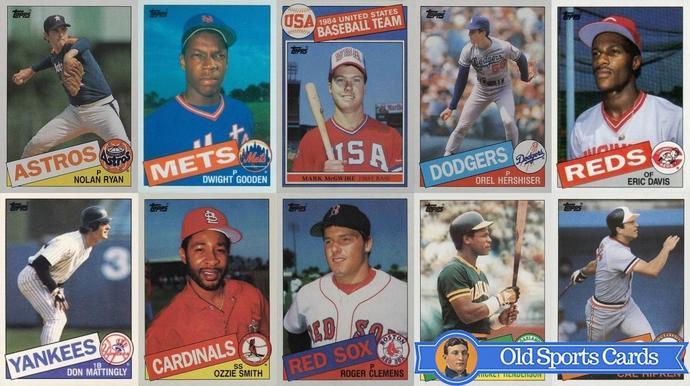 When I look back at the 1985 Topps baseball card set, I have mixed feelings.

There are some fantastic rookie cards to chase and plenty of star power.

But, the set almost seems to be a collection of "what might have been" stories...

Scandal caught up with Clemens and McGwire.

Drugs and alcohol caught up with Gooden and Strawberry.

Injuries caught up to Mattingly and Davis.

Don't get me wrong, there are many positive vibes to this set and it's packed with plenty of Hall of Famers.

It's just that there could have been even more Hall of Famers packed within.

Regardless, the set has held up well over time and remains quite popular in the baseball card community.

Like the 1985 Donruss and Fleer sets, large print runs saturated the market with these cards, driving down their values.

First on the list is the instantly recognizable Mark McGwire rookie card.

Part of a subset (cards #389-404) that paid tribute to several members of the 1984 U.S. Olympic team that took silver in Los Angeles that year, McGwire's card is clearly the key.

For some reason, Topps did not include every member of the team as they notably left out players like Barry Larkin and Will Clark, among others.

Despite the controversy that will forever surround McGwire, the card can still be worth a lot of money in high grade.

But, finding them in top condition can be difficult because of its position on the printing sheet.

Since it was located along the left side, you'll often find this card cut in such a way that throws off its left-to-right centering which prevents it from achieving gem mint status. 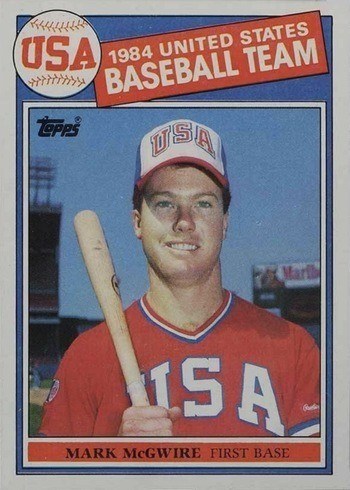 During the mid 1980s to early 1990s, Eric Davis was considered one of the best outfielders in the business as he would consistently rack up great power-hitting numbers and Gold Gloves to boot.

And growing up in Central Indiana where there are lots of Reds fans, I remember this guy's name being tossed around a lot in the card collecting community.

However, injuries piled up and sidelined Davis for the majorities of multiple seasons putting a damper on a once All-Star caliber ball player.

While Davis never did put up a Hall of Fame resume, he put up a solid career overall and his popularity remains incredibly high which is why his rookie card can be worth hundreds of dollars in top condition. 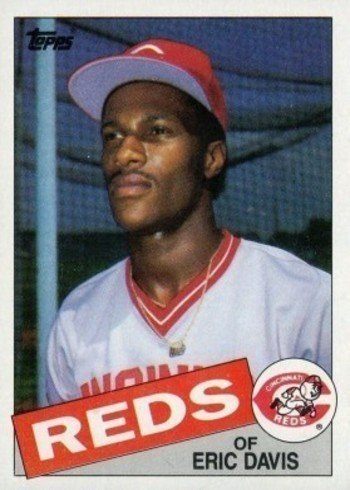 Next on the list is the rookie card of fireballer and pitching icon, Roger Clemens.

Like McGwire, Clemens' legacy will forever hang under a cloud of controversy due to his involvement in the PED scandal.

That said, there's no questioning how talented Clemens really was as he was mowing down opposing batters right from the beginning of his career well before the PED scandal took place.

With 354 career wins, 7 Cy Young awards, and 4,672 strikeouts (just to name a few of his unbelievable achievements) he certainly has the numbers to be inducted into the Hall of Fame.

But, we'll just have to wait and see if voters will ever end up giving a pass to guys like Clemens, Barry Bonds, etc.

In today's market, expect to pay around $400 for this card in gem mint condition. 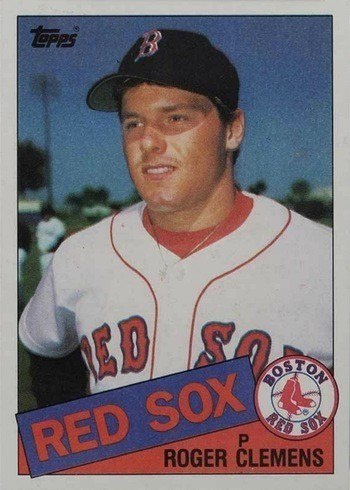 Kirby Puckett was one of my favorite players as a kid and this card was always among the top of my want list as a young collector.

The ten-time All-Star who could hit and field with the best of him and his charismatic personality made him quite the popular ball player among not only Twins fans but baseball fans in general.

There are many Hall of Famers in this set.

And there are several rookie cards in this set.

However, Puckett is the only player to meet both of those criteria making this card the only Hall of Fame rookie card in the set.

Sadly, Puckett died of a stroke at the young age of 45 but collectors throughout the hobby will always remember him and his rookie card as one of the best. 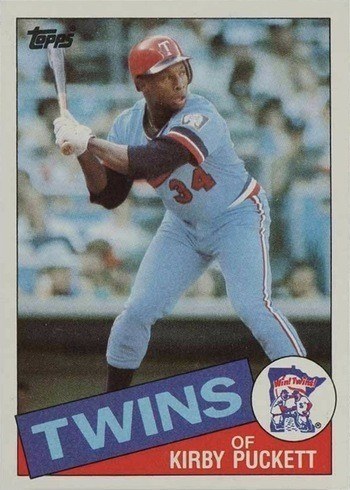 It may surprise you that Ripken's card can be worth so much but it's true: in PSA 10 condition, expect to shell out hundreds of dollars for this one.

Heck, even some of his rookie cards are in that price range.

So why would his 1985 Topps base card be worth so much?

Much of that steep price has to do with just how few of them there are in circulation in that PSA 10 grade versus how many Ripken collectors and 1985 Topps set builders are searching for them.

It's just old-fashioned supply and demand.

One of the most iconic players of the 1980s and 1990s, Ripken left a legacy as a durable, consistent hitter who some would argue was the greatest shortstop to ever play the game. 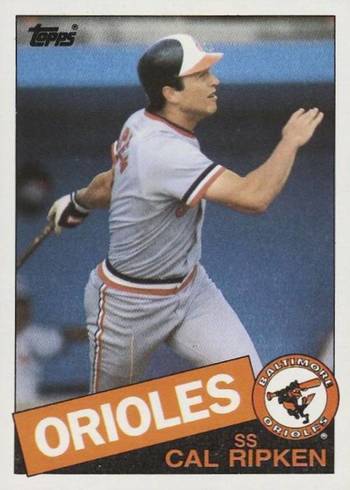 Donnie Baseball was one of the hobby's most sought-after players during the late 1980s and early 1990s because of his Hall of Fame trajectory and status as the leader of the legendary New York Yankees.

However, his is another case where injuries caught up to him and slowed down a once red hot career.

The 1985 season was his finest as he'd go on to hit for a .324 average, smash home runs, drive in 145 runs and score 107 runs which was all good enough to earn him MVP honors for that season.

He'd also pick up a Gold Glove and Silver Slugger award that year, too.

For the rest of 1980s he was still playing at a high level on both sides of the ball but in the 1990s his hitting production began to decline drastically.

He was still winning Gold Glove sin the 90s but his hitting just wasn't what it used to be.

Despite that, he is still one of the most popular players from that era and his cards are still in high demand in top grade. 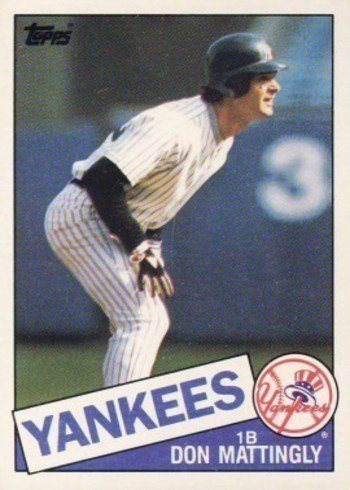 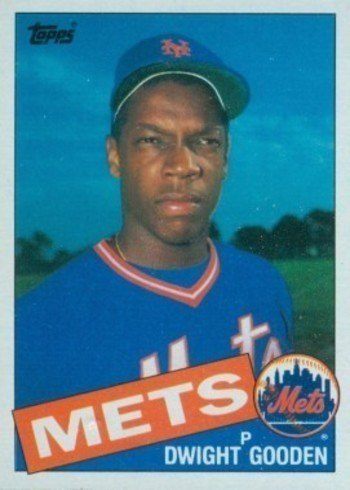 And he also had his own "Record Breaker" card for most singles in a career.

But, his #547 manager card is much more expensive than the other two in PSA 10 grade as there are far fewer of them in circulation.

Like other cards in this set, you can easily get a sense of how supply and demand can really push up a card's value with so many player collectors and set builders fighting to own them. 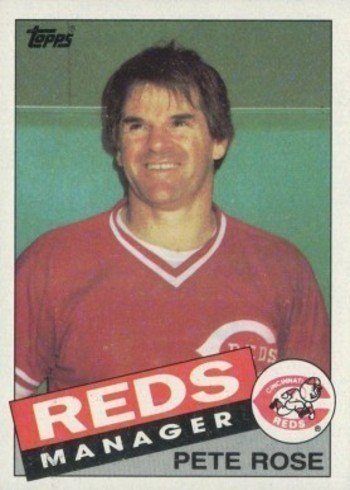 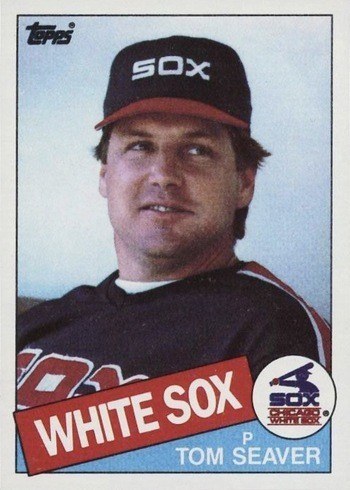 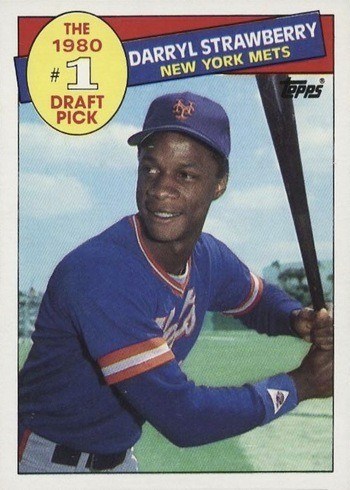 As a 19-year-old rookie phenom, Dwight Gooden burst onto the scene in 1984 as one of the game's most dominant pitchers after he led the league in strikeouts (276) and would win an impressive 17 games.

From that point on, the hype surrounding the young gun was huge.

Sadly, drugs and alcohol use would catch up to Gooden and derail what was then considered a sure-to-be Hall of Fame career.

And although Gooden actually made his cardboard debut in the 1984 Topps Traded and 1984 Fleer Update sets, his true rookie card would be his 1985 Topps #620 issue. 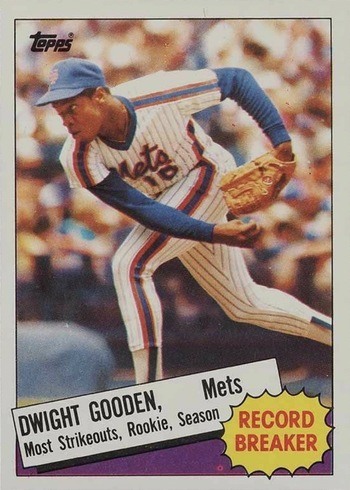 And finally, we're down to Nolan Ryan's base #760 card which shows a fantastic image of the legendary workhorse ready to blow one by an opposing hitter.

As I mention in my article about his key cards, this is one of my favorite Nolan Ryan cards of all even though it's not close to being his most valuable.

The imagery is just incredible as it captures him doing exactly what we all know him for: throwing heat.

In top grade, this card will cost you over $100 even though there are tons of them in circulation in PSA 10 condition.

That just goes to show you how popular Ryan is in this hobby and with baseball fans in general. 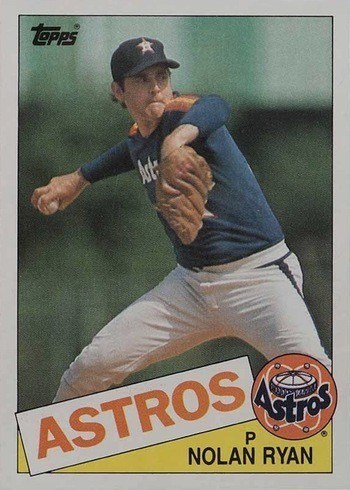 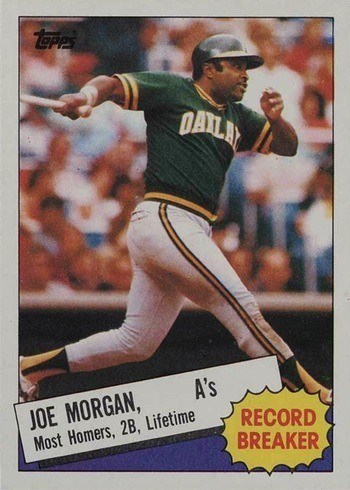 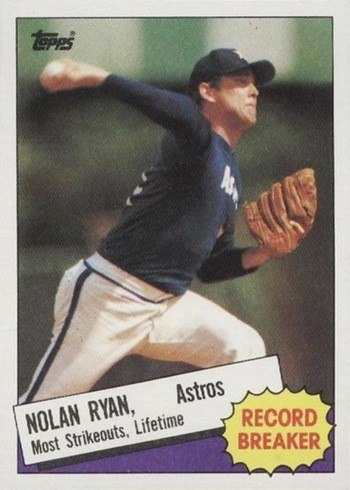 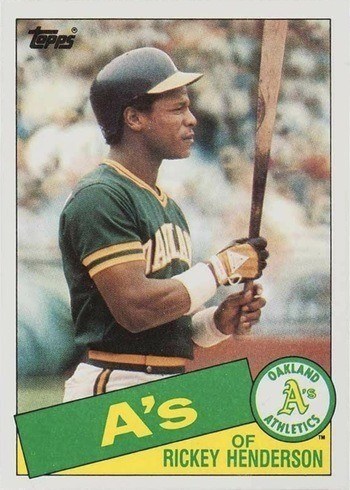 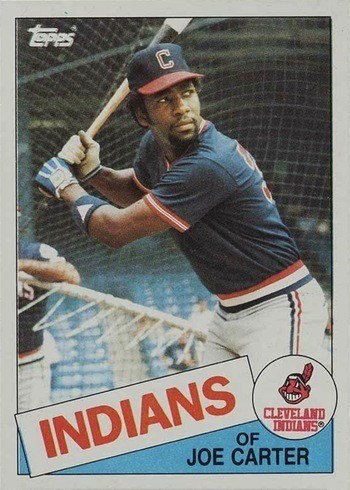 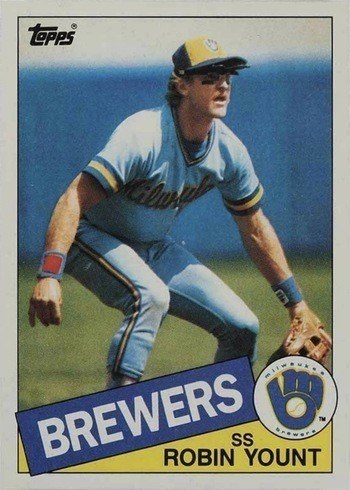 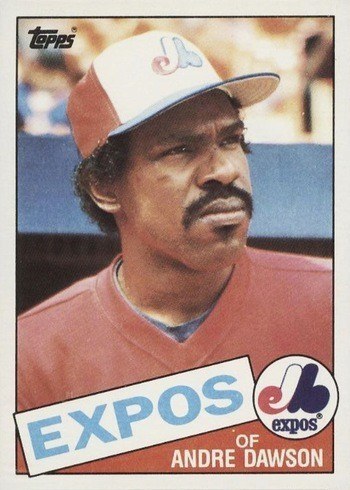 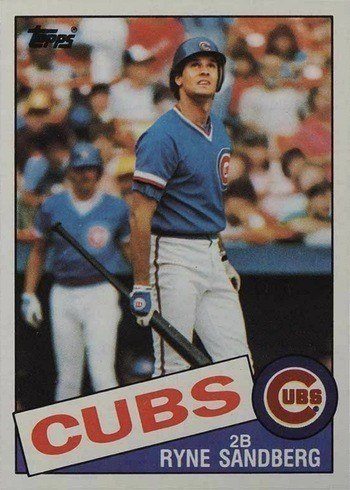 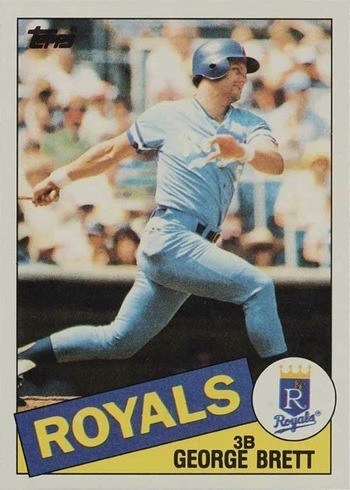 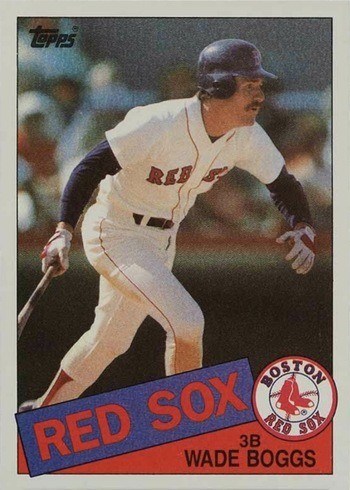 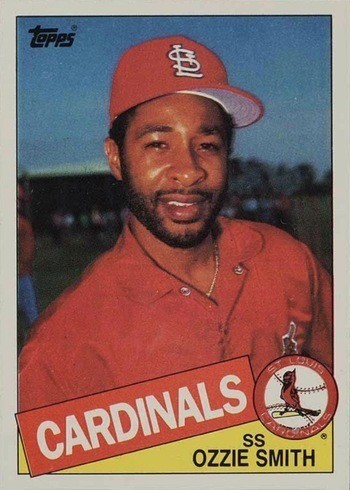 When you look back at the 1985 Topps set, you can quickly tell just how much star power and great rookie cards there are in this 792-card set.

To this day, the set remains popular with collectors of that era who are looking to build the set in top grade and those who collect some of the big names of the 80s. 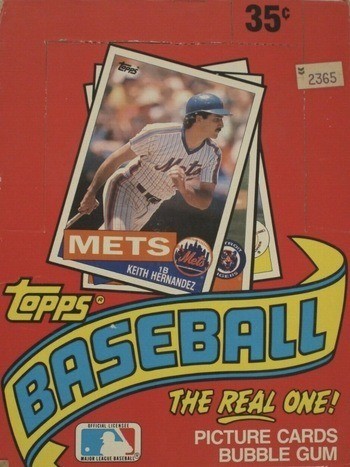 Time will tell if guys like McGwire and Clemens get into the Hall of Fame.

If so, the demand for this set would likely see even more of an uptick.

For now, it remains a solid set which enough of a fan base to keep top grade specimens in demand for quite some time.