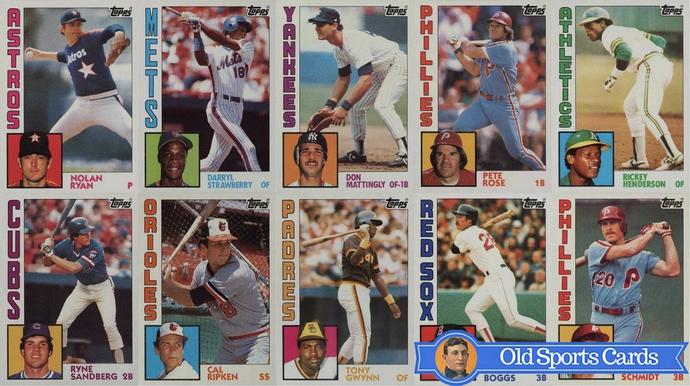 When I think of 1984 Topps baseball cards, two thoughts instantly come to mind:

the Don Mattingly rookie card and the team names in huge block letters that run down the sides of the cards.

True, Mattingly may not be a Hall of Famer, but he's a hobby icon and that card remains high on many collectors' want lists.

And those block letter team names combined with the dual imagery on the front make this set's design truly unique.

Even though production numbers were high, it's still not considered to be part of the junk wax era that defined the hobby later that decade.

There's just so much to love about this set and in this guide, I'll take a look at the ten most valuable.

Like the 1984 Donruss and Fleer sets, large print runs saturated the market with these cards, driving down their values.

Easily one of the most iconic baseball cards of the 1980s, the Don Mattingly rookie card is the clear headliner of the 1984 Topps set.

The same design of this card also appeared in the Nestle and O-Pee-Chee sets that year and all three cards are worth around $250-300 in top grade.

So, it's tough to say which of them is the most desirable of the three, although most hobbyists would likely side with the Topps issue.

Mattingly solidified himself as a solid hitter during the 1984 season as he picked up the batting title that year after finishing with a .343 average.

But, he was even better with the glove as he would go on to win 9 Gold Gloves over his storied career so, rather fittingly, we get a nice shot of him on defense on this card. 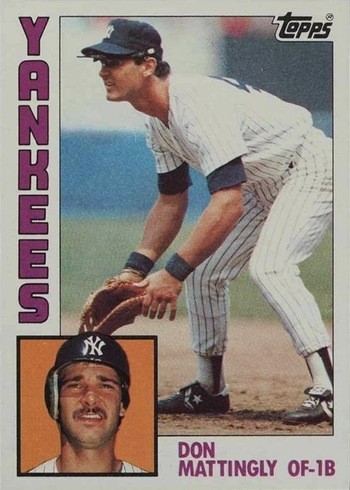 Speaking of Ryan's base card, it's next on the list.

The 1984 season wasn't particularly memorable by Ryan's standards as he struck out "only" 197 batters, didn't make the All-Star team, and didn't receive any Cy Young votes.

Considering he pitched just 183.2 innings, well off his typical workload, it's understandable his production was below his usual eye-popping standards.

Regardless, his 1984 Topps card still boasts fantastic imagery as the main picture of Ryan about to release some heavy heat and the small headshot insert in the lower left combine for excellent eye appeal.

It's one of the better Nolan Ryan cards of the 80s. 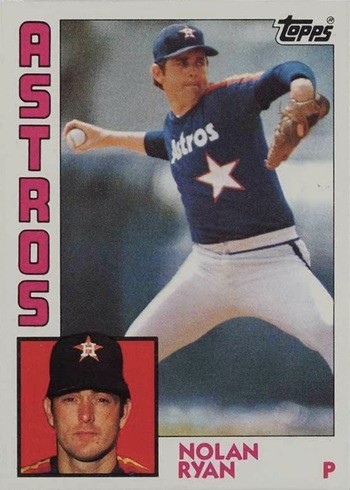 Once one of the hottest cards in the hobby, the 1984 Topps Darryl Strawberry rookie card is instantly recognizable and is still a favorite among collectors of this era.

Strawberry burst onto the scene in 1983, picking up Rookie of the Year honors and would then appear in eight consecutive All-Star games from 1984 to 1991.

Over that time span, he was unquestionably one of the most feared hitters and brightest stars in the game seemingly on his way to joining legends like Mays, Mantle, and Aaron as one of the all-time great sluggers.

Sadly, drug abuse would slam the breaks on Strawberry's meteoric rise and from 1992-1999, he would appear in 50 or more games only twice.

Health issues and suspensions had gotten the best of what once seemed like a Hall of Fame career.

Despite the sad ending to a once remarkable career, this card remains a hobby icon and one of the key cards of the 1980s. Gwynn spent 20 years in Major League Baseball and failed to eclipse the .300 batting average mark only once.

To be so consistent for such a long period of time is incredible and is why he goes down in history as one of the greatest hitters of all time.

As a kid, I remember reading about how he spent endless amounts of time practicing off the tee to hone his craft.

The 1984 season would see Gwynn win his first of eight batting titles after putting up a .351 batting average.

Gwynn made his rookie card debut in the 1983 Topps set, but this second-year card is still a favorite among hobbyists of that era. 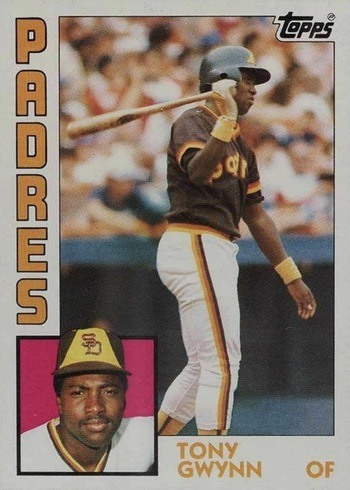 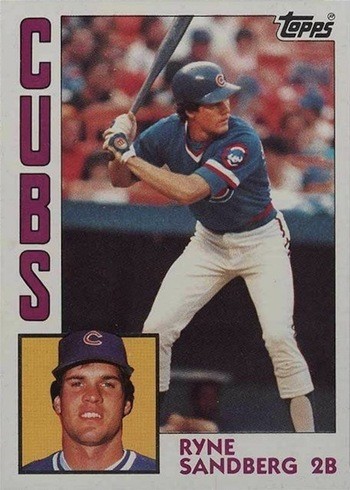 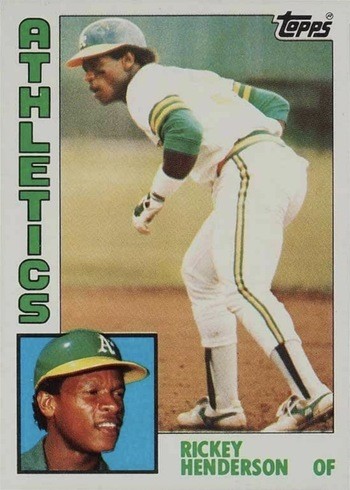 It's not often you find a team leaders card near the top of the most valuable cards in a given set.

But, when you mix scarcity and a big name like Nolan Ryan then this is the result.

And when I say "scarcity," I don't mean to imply this card itself is necessarily rare because it is very easily found in circulation these days.

However, it is rare in PSA 10 condition and both Ryan and 1984 Topps collectors are willing to pay a premium for it in that condition.

I've talked a lot about Ryan here but, Cruz was no slouch either as the guy was a two-time All-Star and finished in the top 10 in MVP voting three times. 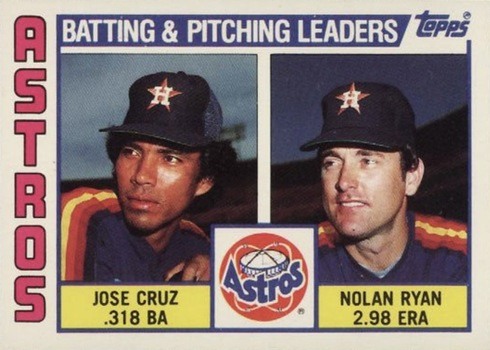 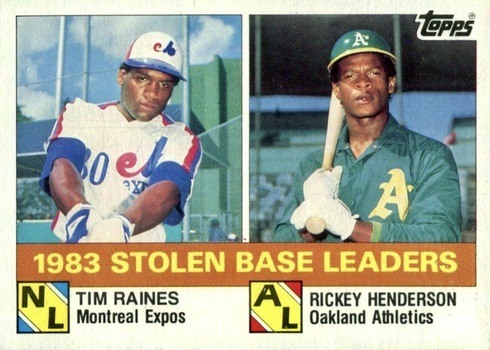 This card hit the hobby during an interesting and evolving time in Rose's career.

After the 1983 season had concluded, the Phillies released Rose after he refused to accept a diminished role and later signed with the Montreal Expos to a one year contract.

And, sure enough, early next season, on April 13, 1984, Rose got a bit of sweet revenge when he became the second player in baseball history to join the 4,000 hit club when he doubled off of Jerry Koosman of the Philadelphia Phillies.

In August of that same season, the Expos traded Rose to the Reds where he would finish his career.

Despite the controversy that surrounds Rose, this and all of his mainstream cards remain quite popular among collectors. 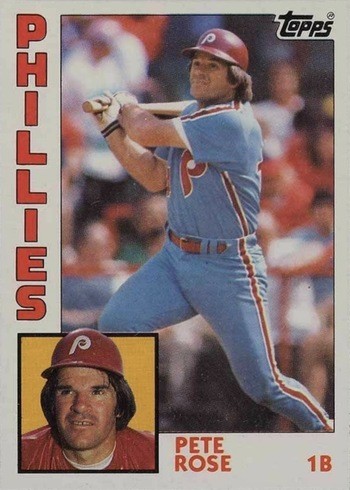 Arguably the best shortstop who ever played, Ripken wasted no time making a name for himself as he picked up Rookie of the Year honors in 1982 and an MVP Award in 1983.

Ripken's 1984 Topps issue was one of my favorite cards as a kid and to this day, I remember picking it up at the local card shop where I lived at the time sometime during the late 1980s.

At the time, it was one of the "oldest" cards I owned and I quickly placed it into one of those screw-down holders for safekeeping.

I still have the card and even though it's ungraded and not in PSA 10 condition, it will always hold an extra bit of nostalgic value for me. It's no secret that Rickey Henderson was a wizard on the base paths and his record of 1,406 stolen bases is likely to stand forever.

During the 1983 season, Henderson stole an incredible 108 bases making it the third time that he had swiped more than 100 bases in a single season.

To help commemorate the achievement, Topps released this 1983 highlight card but I think they missed the mark with the imagery they used.

Rather than a shot of Rickey adjusting his wrist band as he approaches the batter's box, why not use a shot of him stealing a base?

Don't get me wrong, it's still a great-looking card but it could have been even better with a different image. 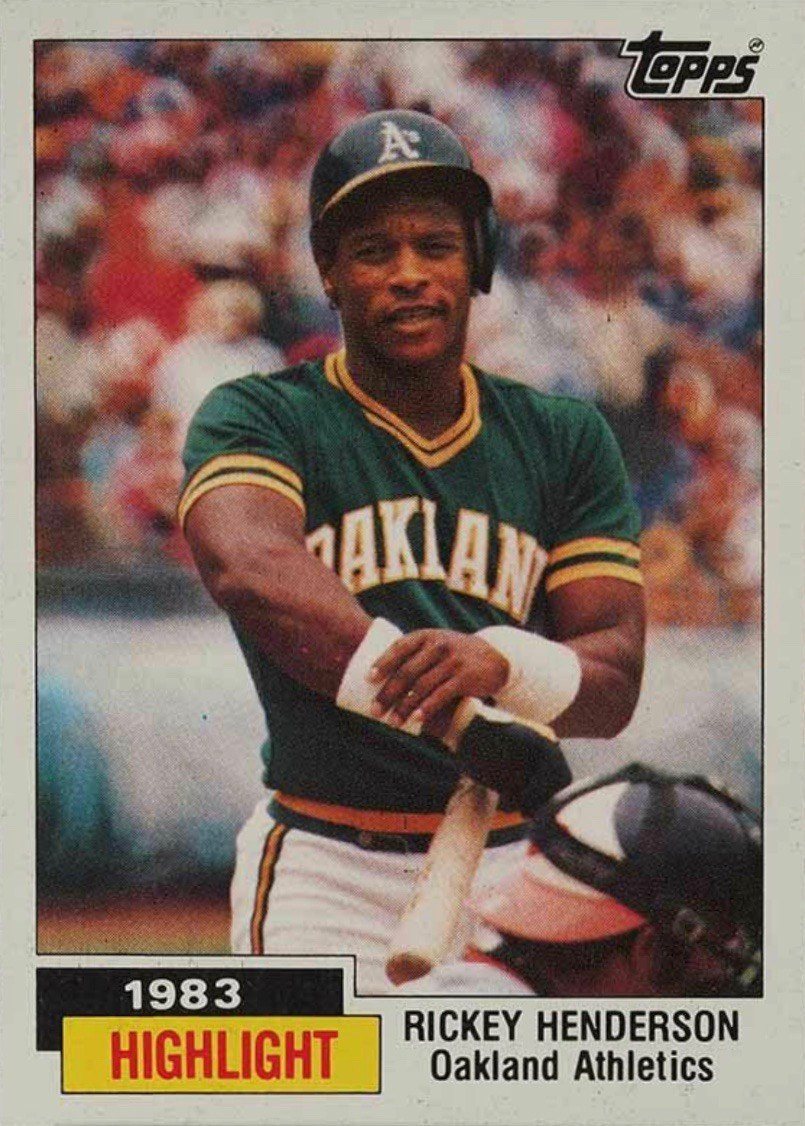 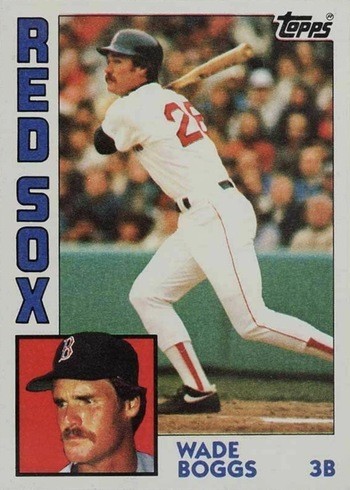 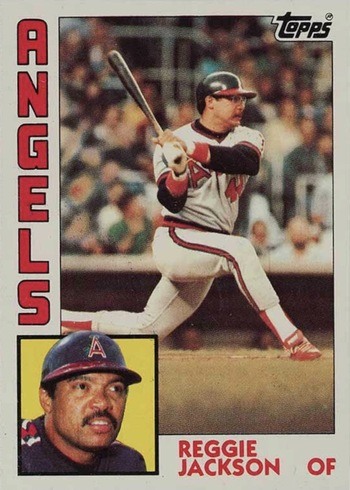 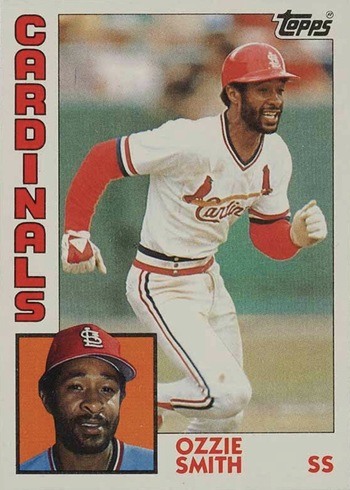 Brett appeared in only 104 games during the 1984 season and his 107 base hits were the fewest of any season in which he was a started.

But, as he had more than solidified himself as one of the game's best by then, he was still elected to his 9th consecutive All-Star game.

His rookie card is a hobby icon and by far his most sought after but many of his earlier cards like this one can still have respectable value in PSA 10 grade. 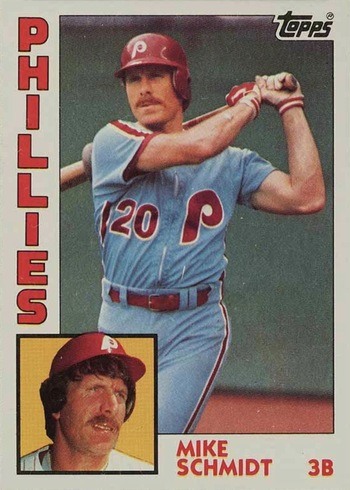 Here's another case of scarcity and hobby hero factor combining to boost the price to a respectable level.

Again, though, when I say "scarcity" I am referring to the fact that only 16 copies of this card have achieved PSA 10 status at the time of this writing.

On top of that, Dale Murphy is a baseball card hobby hero and collectors love this guy's cards.

Kids who collected during the 1980s remember how dominant Murphy was at the time and they grew up idolizing him.

His stretch from 1982-1985 was particularly impressive as he won two MVPs, led the league in homers twice, and won four consecutive Gold Gloves and Silver Sluggers.

The guy was on fire and looked like a surefire Hall of Famer.

Unfortunately, he never did quite put up the resume to be voted into Cooperstown but, as I said, collectors who grew up during the 80s still love this guy regardless. 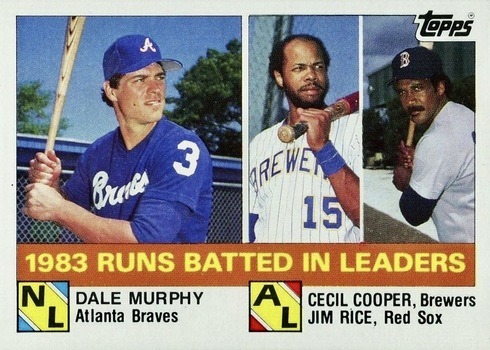 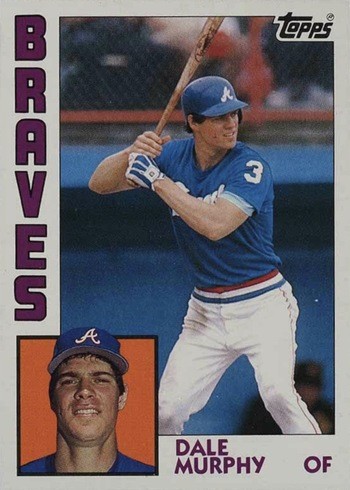 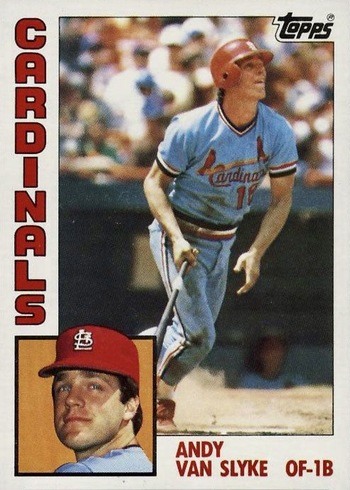 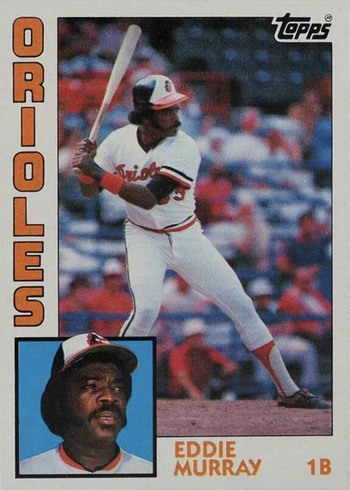 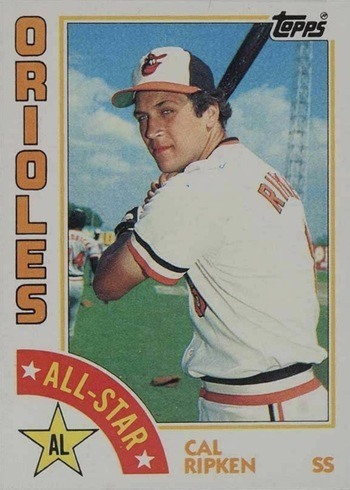 In terms of its design, the 1984 Topps set is arguably one of the better-looking sets of the 1980s.

The secondary image insert in the lower-left corners and the team names in vertically-oriented block letters along the side are instantly recognizable.

The one thing against the set is its lack of Hall of Fame rookie cards. 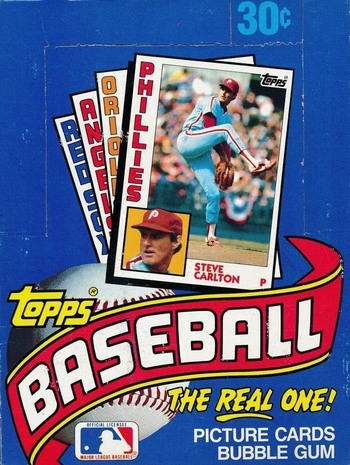 Despite that, there is a lot of star power packed within its 792-card checklist and there were also several different subsets, including:

For those collectors on the lookout for great Hall of Famers of the era or just a large checklist to complete, this set has it all.