Topps used the first six cards in the 660-card checklist to pay tribute to Hammerin' Hank by crowning him the "New All-Time Home Run King" with card #1 and showcasing his previous Topps cards on cards #2-6.

Actually, there are 678 cards in the set if you count the cards made for Padres players playing in Washington that Topps scrapped after the team's plans to move fell through...

But that's another story altogether.

Topps also helped collectors get their hands on every card in the checklist faster than usual in a couple of ways:

The 1974 Topps set packed plenty of history and many great cards for collectors to enjoy.

And in this guide, we'll take a look at the ten most valuable.

He had finished the 1973 season one shy of the Babe at 713 home runs, so you can imagine the emotion and excitement that built up during the offseason.

Aaron stayed on that total for one at-bat in 1974, tying Ruth on April 4 in Cincinnati with a shot off Reds pitcher Jack Billingham.

And on April 8, he took Dodgers hurler Al Downing deep with a fourth-inning bomb.

A fan rushed on the field to congratulate Aaron as he rounded second base.

One of the most iconic moments in baseball history played out, shot for shot in real-time.

He failed to surpass 100 hits for the first time and posted the lowest OPS of his career to that point (.832).

On October 2, Aaron hit his 733rd home run, his last with the Braves.

One month later, the Braves traded him to the Milwaukee Brewers, where he would begin his career swan song as a designated hitter. 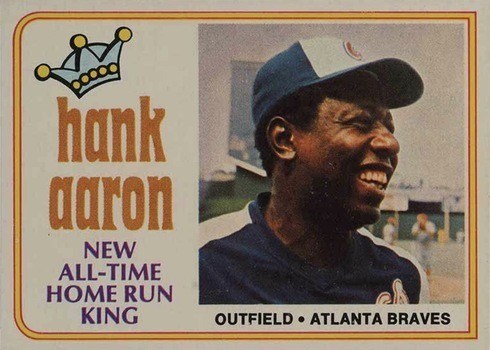 Winfield signed for $15,000 and skipped the Minors altogether and, upon his arrival in San Diego, showed flashes of future greatness in 56 games on the 1973 season.

He also showed empathy beyond his years as he began buying blocks of tickets for underprivileged families.

Winfield continued his generosity in 1974 while blossoming into a legit threat in the batter's box.

On defense, the future seven-time Gold Glove winner showcased his athleticism at all three outfield positions.

Each day, he earned the respect of his peers and manager, John McNamara. "After the All-Star break, McNamara said to me, 'Kid, I'm going to give you a chance to play every day. Play well and the job is yours," Winfield said later.

He did play well and the job would be his in San Diego for nearly a decade. In 1974, he became the only Major Leaguer to toss three no-hitters in two seasons.

On September 28 against the Minnesota Twins, Ryan was an all-or-nothing spectacle, striking out fifteen and walking eight.

And after fanning Eric Soderholm, he secured his third career no-hitter (and a 4-0 complete game win) in front of a loud, sparse home crowd of 10,872.

It was Ryan’s career-best 22nd win of the season, remarkable considering he accounted for just under a third of the team’s 68 victories. 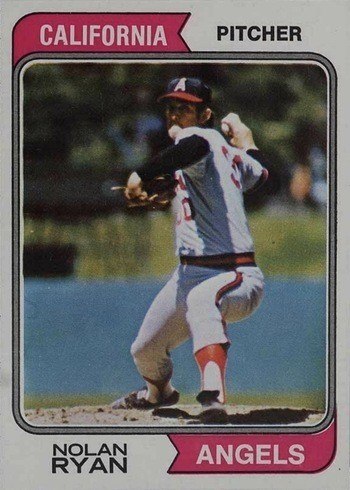 Mike Schmidt's rookie season in 1973 was disappointing as he posted a meager .196 batting average and .697 in 132 games played.

Not to be deterred, the Philadelphia Phillies' third baseman put in plenty of work to correct his hitting issues during the offseason.

The hard work paid off, as  Schmidt broke out in 1974, hitting .282 and leading the National League with a .546 slugging percentage.

He did continue to struggle against off-speed stuff out of the zone, though, as he struck out an MLB-worst 138 times, the first of three straight seasons where he'd pace the Majors in whiffs.

Meanwhile, Schmidt's soon-to-be-legendary glove was on display as his 404 assists in 1974 is still an MLB record for a third baseman.

The Phillies finished third in the NL East with an 80-82 record, but optimism was easy to come by since it was the first time Philadelphia escaped the division cellar since 1970.

Schmidt was an MVP in the making for a team on the rise, and he landed his first All-Star nod and a 6th-place finish in the NL's MVP voting. The 1974 MLB season saw Tom Seaver post an ERA over 3.00 for the first time in his career while giving up more hits per nine innings than any other season since his rookie year.

Used to eclipsing the 200 strikeout mark with ease, Tom Terrific barely crossed the mark with 201 but still managed to lead the league in strikeouts per nine innings for the fifth year in a row with a 7.7 clip.

Seaver's drop-off was primarily related to nagging injuries and, at one point, was diagnosed with a sciatic nerve issue and a dislocated pelvis.

The season was a struggle, to say the least, as the fireballer managed just an 11-11 record, but much of that was due to an unimpressive Mets offense that didn't give him much run support.

After winning the National League the year before, the Mets fell to a disappointing 71-91 record to finish fifth in the NL East. The 1974 Cincinnati Reds were on the precipice of something great, but nobody quite knew it yet.

Cincinnati had earned a reputation as a talented team that couldn’t get the job done, but this was no fault of star catcher Johnny Bench.

The 1972 National League MVP continued to boost his case as the Player of the 1970s with another fantastic campaign in 1974.

He also led the Majors with a whopping 315 total bases and posted the only 100-run season of his career (108).

The Reds missed the playoffs for the first time since 1971, and questions began to mount as to whether the Big Red Machine would ever realize its potential.

Two years and two titles later, Bench and the Cincinnati Reds would silence their doubters and leap from disappointments to a dynasty. After his best all-around season and his only league MVP award in 1973, Pete Rose was due for a letdown.

His .773 OPS was his worst since his sophomore season in 1964 and to top it off, he hit a career-low three home runs while driving in 51.

It was enough to prompt members of the press to wonder aloud if the 33-year-old hit machine had begun to lose a step.

Rose showed up consistently, leading the league in plate appearances (771) for the third year in a row, and still produced enough to lead the Majors with 45 doubles and 110 runs scored.

Cincinnati had the second-best run-scoring offense in the National League, and Rose’s table-setting was a leading factor.

The Reds missed the playoffs by four games with a 98-64 record.

And many still pointed to Rose’s perceived drop in production as the reason why.

By the end of the next season, those criticisms would seem silly. The 1974 Oakland Athletics were one of the most talented ballclubs in MLB history.

But, they were also one of the most dysfunctional.

Jackson’s mood worsened, leading to an incident where he angrily tossed a bat into the stands, just missing two young boys and manager Alvin Dark’s wife.

It was quite a time by the Bay.

Yet, the Athletics were still the class of the Majors, and Jackson was a huge part of their success.

He also led the American League in OPS+ (166) and intentional walks (20), earning his fifth All-Star nod and a fourth-place finish in the AL’s MVP balloting.

And in the clinching Game 5, a heads-up defensive play by Jackson helped secure the team’s 3-2 win.

A dynasty reached its coronation. And then, it was gone. Dave Parker’s wild ride of an MLB career was just getting started in 1974.

But, Parker was a year away from truly finding his power stroke as the left-handed slugger missed most of June and July on the disabled list due to a hamstring injury.

He was, admittedly, constricted by the platoon situation.

Yet, he showed enough in his 220 at-bats for Pirates manager Danny Murtaugh to lift the platoon designation the following season.

Parker responded by becoming one of the most feared hitters in all of baseball.

1974 was just the beginning and the real roller coaster was just catching speed at Three Rivers Stadium. 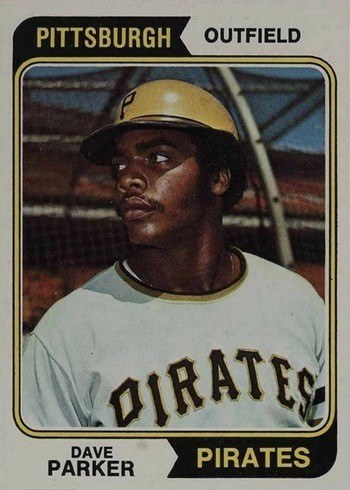 In 1972, L.A. Dodgers third baseman Steve Garvey committed an MLB-worst 28 errors, and rumors swirled that the 23-year-old wouldn't be with the organization for much longer.

At 25 years of age, Garvey was the all-around engine for the N.L. West champion Dodgers.

He posted his first of six 200-hit seasons and committed just eight errors to earn his first of four consecutive Gold Gloves.

It was quite the full-circle moment for a player who almost lost his job because of poor defense.

And in the postseason, Garvey continued to elevate his game, going a combined 15-for-39 (.385) against Pittsburgh and Oakland, hitting two home runs and driving in six, but the Dodgers fell short of a title.

Yet, within a half-decade, Garvey would lead the franchise to championship glory for the first time in sixteen years. As you can see, there are plenty of great stars and Hall of Famers within the 1974 Topps set to keep you busy.

The Dave Winfield and Dave Parker rookie cards are also a couple of great options for guys making their cardboard debut.

Ken Griffey Sr. also has his rookie card in this set but its value didn't quite give it enough boost to make this list.

Overall, this is a decent set from a decade that packs plenty of quirks and hobby history within its checklist.

For those collectors on the lookout for great stars and Hall of Famers of the era or just a large checklist to complete, this set has it all.