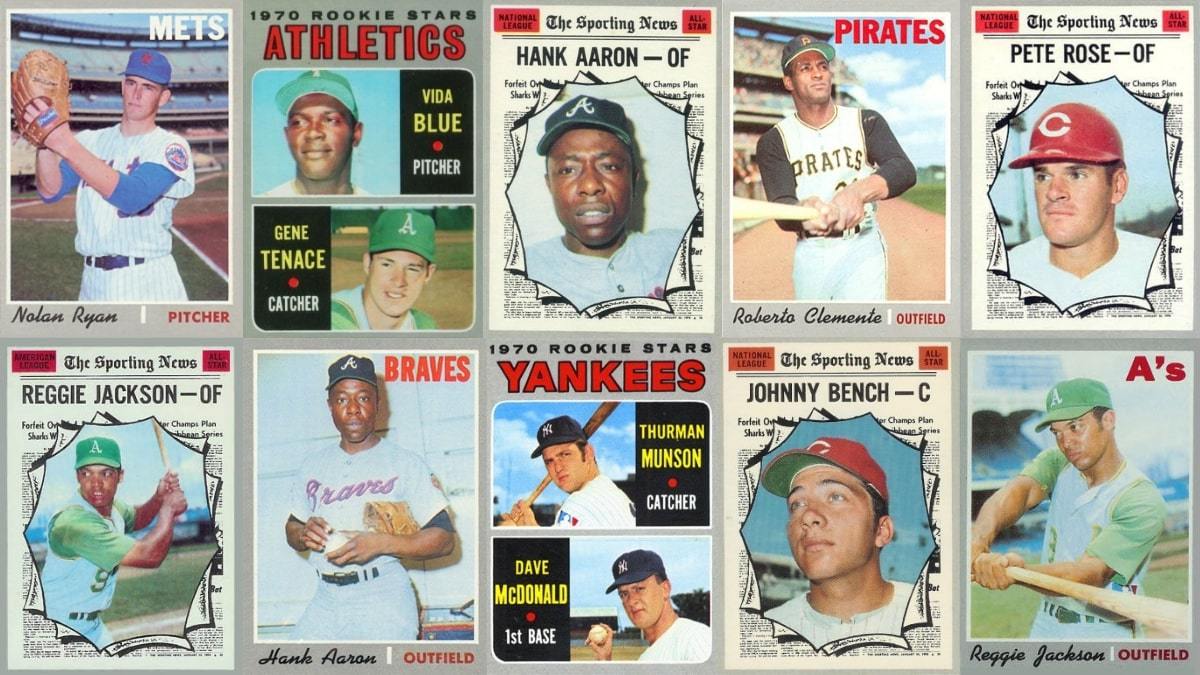 If there is one thing I've learned over the years regarding 1970 Topps baseball cards, it's this:

collectors either love or hate this set.

Most of it has to do with the gray border design as many feel that color makes for a rather drab-looking set.

Others will point to the centering issues that plague the set and/or the lack of any Hall of Fame rookie cards (although there are a couple of great rookie cards of former stars Thurman Munson and Vida Blue).

But whether you love or hate them, this set did pack a lot of star power in its 720-card checklist.

Usually in this hobby, a given player's base card is worth much more than his All-Star card.

However, The Sporting News All-Star cards in the 1970 Topps set were notoriously plagued with centering issues making examples of them in high grade all but impossible to find.

And Johnny Bench's is the most valuable of them all...

Bench wasted no time becoming an All-Star as he appeared in 13 straight All-Star games beginning with his rookie debut in 1968.

Interestingly, the rarity of Bench's All-Star card in high grade isn't too much greater than those of some of the other big name All-Stars on this list.

What gives this card an extra boost in price, in my opinion, is that the 1970 season was the first of his two MVP campaigns in which he turned in single season bests in home runs (45) and RBI (148). 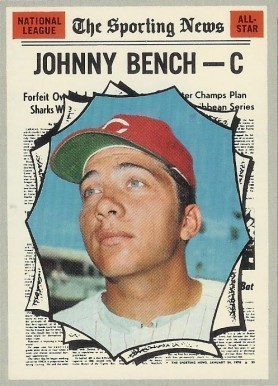 Right behind Bench is Pete Rose, the all-time hits leader and fellow member of those "Big Red Machine" teams that dominated MLB during the 1970's.

While Rose has been kept out of the Hall of Fame, there's no question that he is still beloved by fans and baseball card hobbyists.

His name is consistently at the top of the list of most desired cards in any set in which he appeared right from his rookie card debut in 1963 through the 1980s. Like Rose, the same applies for Nolan Ryan: you'll always find his name at or near the top of the list of key cards in any set in which he appeared.

Though Ryan left a legacy as the greatest fireballer to ever play the game, his early years with the Mets weren't exactly signaling how great he would become.

Sure, his innings pitched totals weren't as high as they were in later seasons but even then, his K/9 ratios were all lower than his career 9.5 strikeouts per nine innings mark.

And so, the Mets gave up and traded him to the California Angels after the 1971 season and from that point on, he became one of the most feared pitchers who ever toed the rubber.

Fittingly, he was named to his first All-Star team that year and as such would have his own 1970 Topps All-Star card to celebrate.

However, Jackson's offensive production took a huge dip in 1970 as nearly all of his major offensive stats were cut in half.

That slump in performance actually prompted Oakland A's owner Charles Finley to send Jackson to Puerto Rico to play over the winter with the Santurce Crabbers.

It worked out perfectly as Jackson was back on track for the 1971 season and would go on to appear in 13 more All-Star games and win an MVP award over the remainder of his storied career. 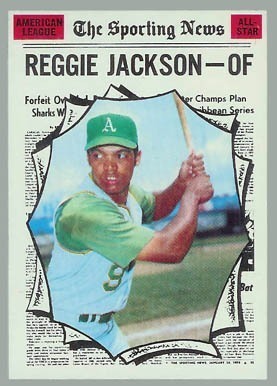 Up next is the All-Star card of the legendary "Hammerin' Hank" Aaron.

As of this writing, just under 3% of all examples of this card submitted to PSA have achieved PSA 9 Mint grade.

That's a low percentage, but not quite as low as some as those of the other All-Star cards in this set.

Sure, some of his stats were much higher in some years than others but he was elected as an All-Star in every season over that span. Thurman Munson was one of the biggest stars of the 1970s until his untimely death in a plane crash on an off day during the 1979 season.

For his efforts during the 1970 season, he was awarded with Rookie of the Year honors.

From that point on, Munson was outstanding with both the bat and glove and since he was routinely considered the backbone of the Yankees, they named him captain at the start of the 1976 season.

In fact, he was the first Yankee captain since Lou Gehrig...that should tell you all you need to about the kind of player and teammate he was.

While his 1971 Topps card with its fantastic action shot is a favorite among collectors, his 1970 Topps is one of the keys to the set. 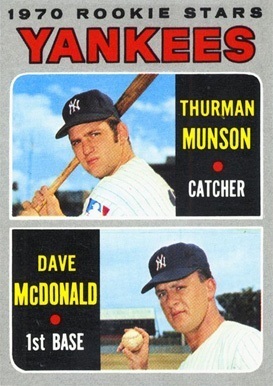 Like Munson, Roberto Clemente was a larger-than-life player and teammate who also met his demise in a plane crash.

On December 31, 1972, Clemente had been on his way to Nicaragua to help deliver aid to earthquake victims when the plane went down and he died.

As a player, Clemente was nothing short of incredible as he'd win 4 batting titles, 12 Gold Gloves, one MVP award and be named to 15 All-Star teams.

As a person, he was exemplary.

In fact, the Commissioner's Award was renamed the Roberto Clemente Award and is given to the player who "best exemplifies the game of baseball, sportsmanship, community involvement and the individual's contribution to his team".

All of Clemente's cards are highly desirable and as you can see, mint examples of this card can be quite expensive. 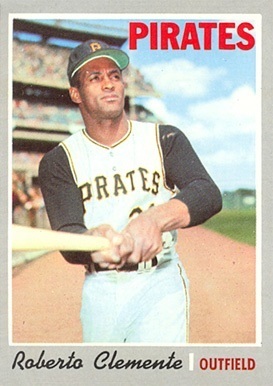 During the 1971 season, Vida Blue turned in one of the greatest seasons any pitcher ever had as he won 24 games, struck out 301 batters, and notched a 1.82 ERA on his way to winning both the Cy Young and MVP awards.

He'd also be one of the keys in helping to lead the Oakland A's to three straight World Series titles from 1972-1974.

Blue was no doubt one of the most effective pitchers during the 1970s but never quite cracked the Hall of Fame.

Regardless, his rookie card is still highly-desired by hobbyists who will pay big bucks for mint condition specimens. Jackson's base card is also a key to the set, although not as valuable in top grade as his All-Star card mentioned earlier.

I've always liked the look and feel of this card because of the determined and focused look on that face.

Sure, the 1970 season may have been a down year for Jackson but this second-year baseball card of the Hall of Fame slugger will always be cherished by hobbyists. 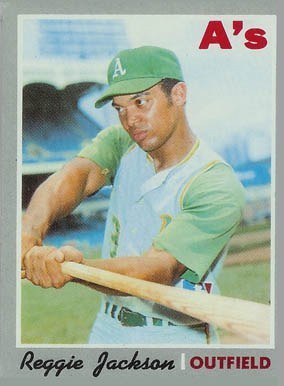 Last but definitely not least on our list is the base card of another Hall of Fame slugger, Hank Aaron.

I've always thought this was one of Aaron's funnier cards as it almost looks as if he were caught off guard by the camera.

It's hard to complain about any Hank Aaron baseball card but this is just one of those cases where I felt Topps could've done a better job capturing a legend like Aaron in a batting pose.

After all, he had clubbed 554 home runs prior to the start of the 1970 season so clearly he was well-known for his bat work.

Like I said, though, it's tough to complain about any Hank Aaron card and I'd gladly take one of these in high grade any day. 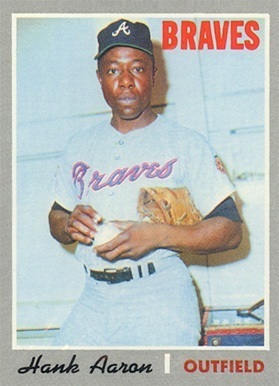 Overall, the one thing that should stand out more than anything with this set is how valuable the All-Star cards can be compared to the base cards.

It's a rarity you just don't see often in this hobby.

For a bit of trivia, this was the first time wax packs cost $0.10 and the last time the Seattle Pilots would appear in a set as they'd already packed up and left for Milwaukee to become the Brewers.

While the hobby may have mixed opinions on the aesthetic appeal of this set, there's no doubting that it contains huge star power and great value overall.