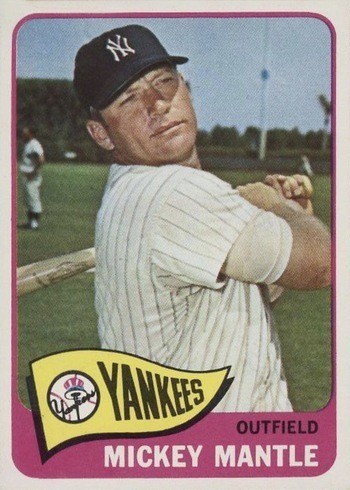 While any Mantle card from his playing days is highly desirable, the 1965 Topps Mickey Mantle consistently ranks among collectors as one of his best of the 1960s.

The imagery of The Mick following through on his swing and staring off into the distance in his Yankee pinstripes gives the card fantastic eye appeal.

Combined with the pink border and the calm mood of the practice session occurring in the background, the card almost has a calm and easygoing vibe to it.

But, we all know that Mantle was anything but calm at the plate as he was capable of blasting towering home run shots seemingly with ease.

The front of the card boasts a large, full-color image of Mantle following through on a swing in his Yankees pinstripes.

It's arguably one of the most memorable images of any of his cards from the 60s.

If I'm not mistaken, this photo appears to have been taken during a Yankees' Spring Training practice or warm-up at Fort Lauderdale Stadium in Fort Lauderdale, FL, before the 1965 season.

The Yankees called Fort Lauderdale home every Spring from 1962 to 1995 before moving over to Tampa on the Gulf Coast to play in what is now George M. Steinbrenner Field.

There are many great stories from the Yankees' time in Fort Lauderdale and you can read about a few of them here and here.

In the lower-left of the card, the Yankees pennant waves in front of a pink nameplate that contains Mantle's name and position.

The reverse of the card uses a horizontal layout with a light blue color scheme.

Near the top, just under Mantle's card number, name, and personal information, a short write-up reads:

The Yankees failed to make the playoffs for the remainder of Mantle's career from 1965-1968, so his playoff home runs total would remain at 18.

And he would never finish higher than 19th in MVP voting during that time, but three career MVPs is still incredibly impressive.

Mantle's stats from 1951 to 1964 round out the rest of the card's reverse, leaving very little space unused. The most common condition issue with this card, and the rest of the 1965 Topps set, for that matter, is poor centering.

You'll often find the image favoring the left or right side of the card a bit more than the other.

Sometimes the image will even appear tilted.

Those colored nameplates are also notorious for showing print bubbles that can detract a bit from the overall aesthetics of the card.

Most grading companies use a 1 - 10 scale to judge a card's condition, with 1 being the lowest and 10 the highest--the higher the grade the higher the value.

To give you an idea of differences in condition, notice the excellent centering, sharp corners, and beautiful surfaces of the PSA 9 card below versus the PSA 4: Most 1965 Mantles that I come across ungraded are usually in the PSA 3 to PSA 5 range as they were well-loved by collectors over the years.

If there are any tears, pinholes, markings, wrinkles, or creases, then the card will almost always grade out as a PSA 1.

Even as a 1 in poor condition, this card has some value since it's a Mickey Mantle.

So what is this card worth?

The following table shows estimated values in conditions ranging from PSA 1 (Poor) all the way to PSA 9 (Mint):

As you can see, condition is everything in this hobby when it comes to a card's value.

After finishing second to Brooks Robinson in the 1964 MVP vote, Yankees fans had high hopes for another monster season from their hero, Mickey Mantle.

However, injuries nagged at Mantle and many Yankees players throughout the 1965 season, forcing the first losing season that Mantle had ever experienced as a Yankee.

With a 77-85 record, the Yanks finished sixth in the American League and a distant 25 games behind the first-place Minnesota Twins.

Mantle's batting average nosedived to .255, while his .452 slugging percentage and .831 OPS were the worst they'd been since his rookie season in 1951.

Despite the disappointing production, Mantle was still selected as an All-Star for the eighteenth time though Tony Oliva replaced him because of injuries.

With injuries holding him back, Mantle turned in the following stat line on the season:

Though his season may have been disappointing, and the Yankees would never reach the playoffs with Mantle in uniform again, he was still a baseball hero.

Still today, he is regarded as one of the all-time greats, and his 1965 Topps card is still the most desirable of the set.