While all of his cards are highly-demanded, the 1956 Topps Mickey Mantle is always in the conversation as one of his best overall.

The design and artwork are incredible...

And the 1956 season itself was Mantle's very best as he'd take home both the MVP and Triple Crown honors.

There is just so much to love about this card.

In this guide we'll take a look at what makes it so special, how much it's worth, and how to best go about buying and selling one.

In 1955, Topps released its first set with a horizontal layout but Mantle was noticeably absent from the set as he had a contractual obligation to Bowman instead.

However, Topps would again use a horizontal layout in 1956 and fortunately for collectors Mantle was included this time around as the company bought out Bowman.

And this card did not disappoint...it is visually stunning and easily one of Mantle's best-looking cards in the hobby. 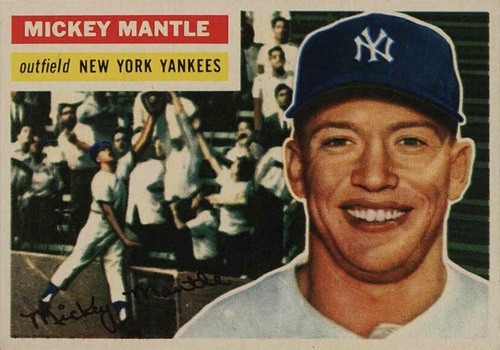 Everything about this card is perfect: the head shot of Mantle with a beaming smile on the right side, an image of Mantle making a leaping catch in the background, the facsimile signature in the lower-left corner...

Heck, even the nameplate in the upper-left corner really pops with the red and yellow color scheme.

The reverse of the card was also printed with a horizontal layout and contained the usual personal information and statistics typical of most baseball cards.

However, the three cartoons in the middle are some of the very best of any baseball card in existence.

The first panel pays tribute to Mantle's power as a spectator follows one of his towering homers via telescope.

The middle panel celebrates the grand slam that he belted in the 1953 World Series.

And the final panel speaks to just how fast Mantle was as a cartoon image of him is shown outpacing his own shadow.

As I mentioned earlier, the backs can also come in one of two color variations: gray or white.

Here you can see the difference: The white back variations are considerably more rare.

The most common print issue with this card is poor centering.

In fact, all 1956 Topps cards are commonly found off-centered left to right, top to bottom, or both.

Take a look at this example below that was graded PSA 8 Near-Mint condition.

You can clearly see the image favors the right and bottom sides of the card. If a card is too off-centered and outside the normal tolerances, PSA will give the card an (OC) qualifier and that can detract from the value substantially.

However, I think they're more tolerant on 1956 Topps than on other issues, at least that's the impression I get.

Another issue with 1956 Topps are what are known as "rough cuts".

In this close-up of the same PSA 8 card above, you can see the bottom edge is not straight.

These "rough cuts" were due to lower-quality cutting methods used by Topps back then and both PSA and hobbyists are well aware of these cutting methods that affected many vintage sets.

And both PSA and hobbyists are forgiving of rough cuts since they are not considered normal wear and tear from handling over the years.

If cards do display those sings of wear and tear, like the small bends and rounded corners that you'll see in this PSA 3 example below, then the grades (and value) will be negatively affected. 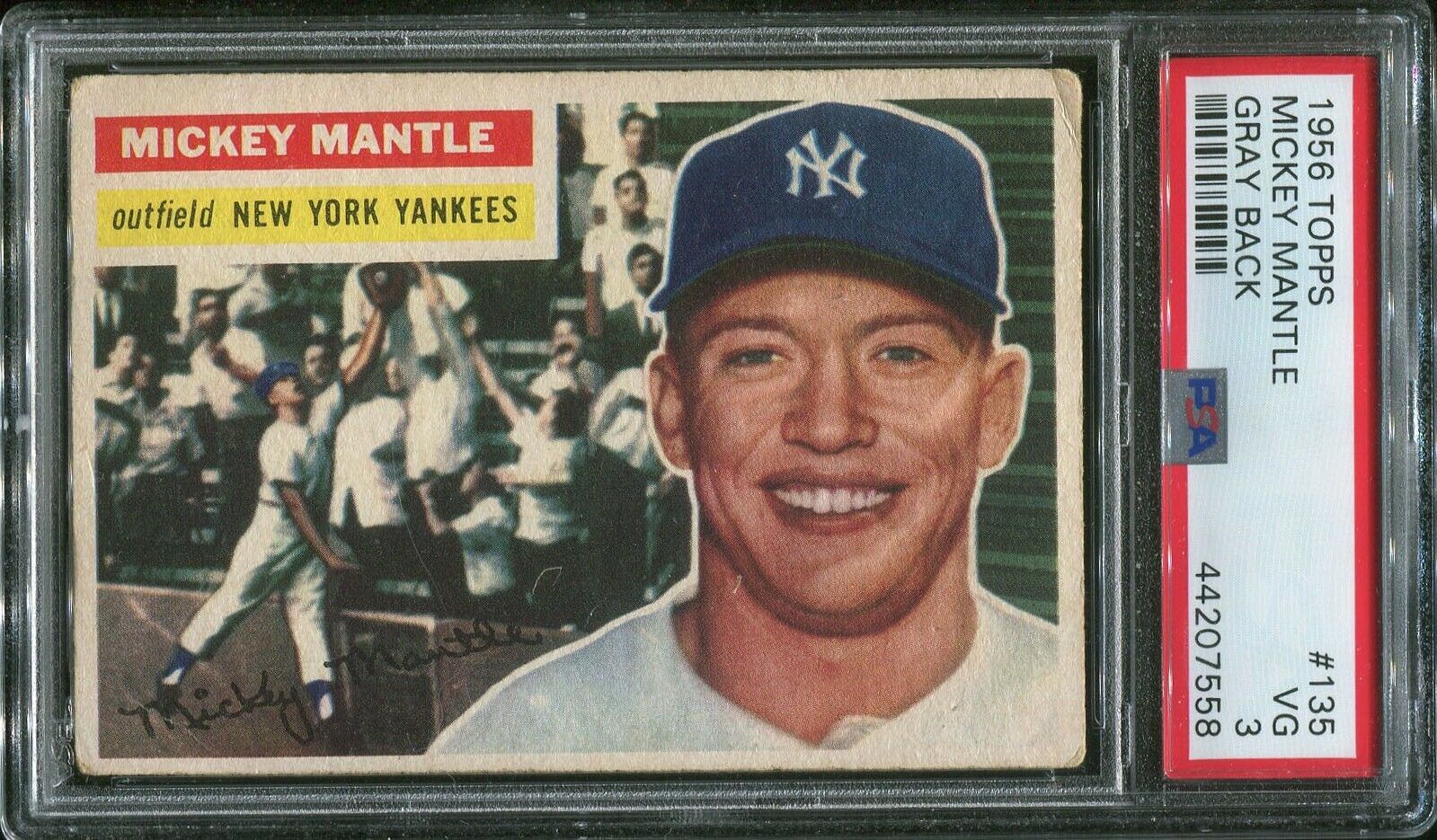 Most 1956 Mantles that I come across are typically in the lower PSA 3 grade range which is completely expected given that most of them have been well-loved by collectors for several decades now.

So what are these cards worth?

The following table and graph display estimated price levels (at the time of this writing) at various condition grades: As you can see, the white back variations can command a premium over the gray back versions, especially in higher grades.

That's because they're more scarce.

As I mentioned earlier, most 1956 Topps Mantles that I see ungraded are in the 1 - 3 range.

Even as a 1 in poor condition, this card can be worth several hundred bucks.

The 1956 season was the year Mantle won the Triple Crown and first of his three career MVP awards.

It was easily the best season over his storied career.

Just look at the numbers he put up that year (numbers in bold indicate that he led the league):

Each of the bold numbers above were also career highs for him except for OPS as he'd turn in a 1.177 OPS the following year in 1957, also an MVP campaign.

These numbers are mind-boggling and even though they were terrific individual accomplishments, they were made even sweeter by the Yankees bringing home the 1956 World Series title as well.

Similarly, the season Mantle had that year made his 1956 Topps issue even sweeter and one of his best baseball cards in the hobby.